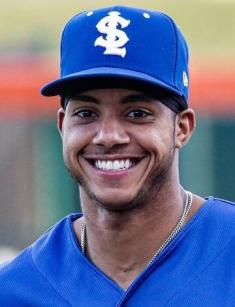 Jeremy Joan Peña is a Dominican-born baseball shortstop. He is best known for his time with the Houston Astros of MLB. He was born on September 22, 1997. He is of Dominican nationality and mixed ethnicity.

He was raised in Santo Domingo, a city that is located in the Dominican Republic. There he spent his early years, and then, when he turned 9, the family moved to Rhode Island. He attended high school and played baseball there. There are no details about his childhood and youth. All the information available is that his dad, Geronimo, played for the Cleveland Indians as an infielder in MLB. His mom is Cecilia.

After graduating from high school, he decided to attend the University of Maine and start playing college baseball.

A member of the America East Conference All-Rookie Team in 2016, Jeremy started and participated in 55 games as a freshman at Maine, batting.283 with one home run, 15 RBIs, and 11 stolen bases. He competed for the Plymouth Pilgrims in the New England Collegiate Baseball League that summer. Jeremy batted.319 with six home runs and 32 RBIs in 54 games as a sophomore in 2017. After the season, he played for the Chatham Anglers in the Cape Cod Baseball League, where he was named an All-Star. As a junior, he started 54 games and posted slash lines of.308/.393/.469 with five home runs, 28 RBIs, and ten stolen bases, earning Second-Team American East honors.

The Astros chose Jeremy's contract and added him to their 40-man roster on November 19, 2021. Jeremy was appointed the starting shortstop for 2022 spring training after Carlos Correa, the previous shortstop, left via free agency. Jeremy was put on the 10-day disabled list after suffering a left thumb injury against the Texas Rangers on June 13, 2022. On June 26, the Astros made him active. Before Yordan Álvarez's game-winning home run, he had singled. The third game was won by Pea's home run in the top of the 18th inning against Penn Murfee, which was also his first career home run on the playoff stage. The game went a record-tying 18 innings in postseason play, including an incredible 17 scoreless innings.

Jeremy has several social media accounts, so his net worth is about $5 million as of 2022. By the way, his yearly salary is about 700,000 USD. Many sources say that Pena is currently in a long-time relationship with Vasiliqi Turlla, who is an athlete.

Here is the full list of achievements that Jeremy earned for his entire baseball career: