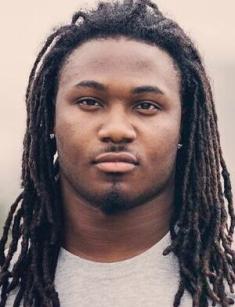 D'Onta Foreman, who was born on April 24, 1996, is a popular football running back. D'Onta is a Texas native who spent his entire childhood in Texas City. He is of American nationality and black ethnicity.

Currently, D'Onta is playing for the Carolina Panthers (NFL). He is also known for playing college football in Texas, with Houston Texans in the 3rd round of the NFL Draft (2017).

D'Onta has been playing football since an early age. He is from an ordinary American family. His dad's name is Darreck Foreman, and his mom's name is Shawn Smith. According to the information, D'Onta was raised with his brother, Armanti Foreman.

In his childhood, D'Onta studied at the public high school in his hometown, and then, after graduating, he enrolled at the University of Texas.

D'Onta was chosen by the Houston Texans in the third round of the 2017 NFL Draft. In 2017, Foreman was selected as the seventh running back overall. He was added to the physically unable to perform list on September 1 of last year to begin the season while repairing his ruptured Achilles. He was released by the Texans on August 4, 2019, who gave the excuse of bad work habits.

D'Onta got a tryout with the Tennessee Titans on August 17, 2020, after skipping the 2019 NFL season. He was added to the Titans' practice squad on September 29, 2020. He recorded a receiving touchdown from Ryan Tannehill in Week 10's 34-17 defeat to the Indianapolis Colts. D'Onta concluded the 2020 regular season with 22 runs for 95 yards, one five-yard touchdown reception, and six games played overall as Derrick Henry's backup.

The Atlanta Falcons worked out with him on August 3, 2021. On August 9, 2021, D'Onta subsequently signed with the organization. He was reinstated to the practice squad the next day after being dismissed on August 31, 2021.

D'Onta was added to the Tennessee Titans' practice squad on November 2, 2021, to fill in for the injured Derrick Henry. Four days later, he was moved to the active roster. He has nine receptions for 123 receiving yards in nine games, coupled with 133 carries for 566 running yards and three rushing touchdowns in the 2021 season.

He agreed to a one-year deal with the Carolina Panthers on March 16, 2022. D'Onta had 15 carries for 118 yards in the Week 7 victory over the Tampa Bay Buccaneers, which resulted in a 21-3 score.

As of 2022, D'Onta is in love with Carissa McGaskey, and as of 2022, they are still together. D'Onta has a son, D'Onta Jr., who passed away just two months after birth. The football player was even arrested because of marijuana.

Throughout his career, D'Onta received the following awards: