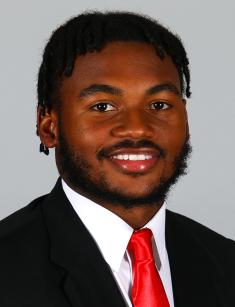 D'Andre Swift is an American football star. He's a running back for the Detroit Lions of the National Football League.

Swift was born on January 14, 1999, in Philadelphia, Pennsylvania and spent his early years there.

His mom's name is Ayanna. His dad's name is Darren. He owns a gym called Swift Fit Gym where some of his son's teammates train.

There has been no official information available about the star's siblings. He allegedly has younger sisters whom he has always protected. Maybe he has a brother too.

Swift's grandfather on his mom's side used to be a very special person in his life and his best friend. His name was Henry Holloway. He was always dreaming of having more kids in addition to Ayanna. Unfortunately, that was impossible. When D'Andre was born, Henry began to perceive him as a son. They used to spend a lot of time together. They enjoyed watching TV in each other's company. Henry was a football fan and his grandson inherited this passion.

Mr. Holloway passed away when his grandson was just 6 years old. To honor him, Swift wrote "Pop Pop" on the tape that he put around his wrists and cleats when playing football in college. Pop Pop was his granddad's family nickname.

All his family members are devout Christians. On Swift's left biceps, there is a large tattoo that refers to the New Testament.

In school, Swift was very good at football. Several colleges confirmed they would have loved to accept him but he opted for the University of Georgia.

He used to wear soccer cleats at training sessions. Unlike their football counterparts, this type of shoe doesn't provide enhanced stability. But it's much lighter, which grants the player extra flexibility and maneuverability. That was an unfair advantage, so trainers made Swift switch to football cleats.

In 2019, he suffered a leg injury. After becoming a pro player, he had a few more traumas. In 2022, he damaged his shoulder and ankle but quickly recovered. Plus, he had a brain injury.

Swift switched to professional football in 2020, when the Detroit Lions picked him in the NFL Draft. They signed a 4-year contract. The sportsman is expected to earn $8.5 million during this period.

Apart from that, Swift doesn't seem to have any other sources of income. He hasn't signed any endorsement deals yet — but most probably, it's just a matter of time.

This celebrity prefers to keep his private life away from the limelight. He seems to be single and doesn’t have kids. There have been no rumors about him dating anyone.