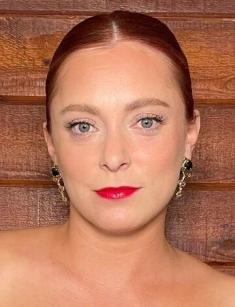 Rachel Leah Bloom, who was born on April 3, 1987, is a California-native actress, singer, comedian, producer, and writer. She is of American nationality and white ethnicity.

Rachel is better known for working on such projects as Most Likely to Murder, The Angry Birds Movie 2, and Trolls World Tour (in 2020). She got numerous awards: TCA Award, Golden Globe Award, and Primetime Emmy Award

Rachel is from California. Her hometown is Los Angeles. She spent her entire childhood in Manhattan Beach. Rachel was raised in a well-settled American family: her mom, Shelli Rosenberg, is a musician, and her dad, Alan Bloom, is a lawyer in the field of healthcare. Rachel is Jewish.

Rachel studied at the public school in Manhattan Beach and then she enrolled at New York University. She got a bachelor of fine arts in drama.

Rachel composed and performed the song "Fuck Me, Ray Bradbury" in April 2010. She was highlighted in Laughing Matters, a 30-minute YouTube documentary, which aired on October 10, 2019. At its Hats off to Heroes virtual event on November 18, 2020, Rachel received the Lifesaver Award from ELEM/Youth in Distress in Israel, a nonprofit organization that assists Israeli youth in need. Bloom taped a half-hour pilot for Showtime on May 7, 2015.

As of 2022, Rachel is in a longtime relationship with her husband, Dan Gregor. He is a director, producer, and actor. The actress had many mental illnesses throughout her life: she struggled with OCD, anxiety, and depression. In April of 2020, Rachel and Dan welcomed a child.

Rachel is the author of her own memoir called I Want To Be Where The Normal People Are. It was published by GCP. The book came out in November, 2020. There, Rachel describes her own experience of being diagnosed with mental health struggles.

She also recorded some soundtrack albums, such as for Crazy Ex-Girlfriend and Trolls World Tour.

Throughout her career, Rachel received the following awards: