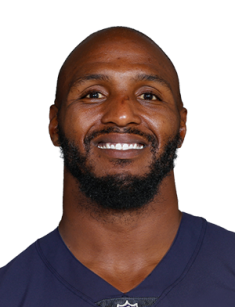 Robert Quinn is an American football star. He's a defensive end for Philadelphia Eagles of the National Football lEAGUE.

His mom is of Puerto Rican origin. His sister Jasmine Camacho-Quinn is an Olympic gold medalist hurdler.

Robert used to play football in school. He took a break because of a benign brain tumor. He underwent surgery, fully recovered and came back to sports.

In 2008, being a freshman, he was named the most courageous player in the league. In two years, he had to miss the season for providing the investigators with misleading data about receiving jewelry and travel accommodation.

He and two fellow athletes enjoyed improper benefits at the university. In 2013, they were prohibited from using the sports facilities of the University of North Carolina and contacting the current athletes of this institution.

Despite these pitfalls, Robert managed to build an impressive career. His PFF stats are excellent. The information featured on his ESPN page can make any aspiring football player envious. He signs contracts with top teams.

The agent of the St. Louis Rams approached Robert in 2011 and offered him a $9.43 million contract for 4 years. In three years, they signed a 6-year extension.

In 2013, Sports Illustrated named Quinn the NFC Defensive Player of the Week for the first time. In three years, he got a concussion and was placed on injured reserve.

Robert joined Miami Dolphins in 2018 but stayed with this team only for a few months.

Dallas Cowboys got Robert in 2019. Previously, he used to wear jersey number 94. Another player of the Cowboys used this number, so Quinn had to accept the 58 number. He took anti-seizure medication that the league classified as a performance-enhancing substance, that's why he was suspended for the first two games of the season.

In 2020, this footballer signed a $70 million contract with the Chicago Bears for 5 years. He switched back to jersey number 94. He missed the inaugural match of the season because of an ankle injury and debuted with the team the next week.

Robert began to play for the Philadelphia Eagles in 2022. Roquan Smith from the Bears got very emotional about this trade.

When you start googling about Robert's private life, you mostly come across information about his namesake. The latter is an expert in management. He got famous due to the culture model that he developed together with Kim Cameron.

As for Robert the sportsman, his spouse's name is Christina Quinn. The couple tied the knot in 2013. Their first son was born in 2011, that's why Robert arrived a day late to start practicing with St. Louis Rams.