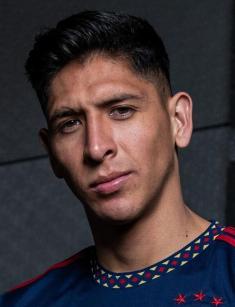 Edson Omar Álvarez Velázquez, who is simply known as El Machín, and who was born on the 24th of October 1997, is a Mexican professional football player, mainly a defensive midfielder and sometimes a center-back. He plays for such football teams as the Mexico national team and the Ajax football club.

Edson was raised in Tlalnepantla de Baz, which is a municipality that is located in Mexico City. His parents are Adriana Velazquez and Evaristo Avlarez. His dad owns a business, and when Edson was young, he helped his parents with it. The business was about manufacturing football jerseys for local football teams. Edson enjoyed playing football since his early years, and one day he decided to start playing it professionally. He played on various youth teams, one of them being Club America. The training was a four-hour drive from his home, so he spent a lot of time just arriving at the club. According to Edson's words, he even spent the majority of his salary just on transportation. Edson grew up with siblings.

Edson joined Club América's youth club in 2014 at the age of 16, participating in the under-17 team. The following year, he was promoted to América's second-division team while still playing for the under-17 squad. In lieu of the injured Mateus Uribe, Edson received the start for the second leg of the Apertura final against Cruz Azul on December 16, 2018. Edson scored twice as América won their 13th league championship with a 2-0 aggregate score. In the team's 3-0 victory over Lobos BUAP on February 23, 2019, Alvarez made his 100th competitive appearance for América. He was signed by AFC Ajax on July 19, 2019, to a five-year contract, subject to a medical exam, for an estimated US$17 million. It was disclosed on October 27, 2021, that Edson had extended his agreement with Ajax through the year 2025. He made his 100th appearance in a league win over PEC Zwolle on April 30, 2022, when he was admitted into the club's Club van 100, becoming the 174th player in the club's history to enter the ranks.

In order to prepare for the 2017 CONCACAF U-20 Championship and the 2017 FIFA U-20 World Cup, Edson was called up to the under-20 squad camp. His first call-up to the senior national team for a friendly matchup against Iceland came on January 30, 2017. The player replaced Jess Molina in the 60th minute of the match against Iceland on February 8 to make his senior debut. He was a part of Gerardo Martino's tentative Gold Cup roster in May 2019.

Not much is known about Edson's personal life, but one thing is revealed. He is dating Sofia Toache. She is a popular Instagrammer and often shares photos of her and her boyfriend with her fans.

Here is the list of honors that Edson received throughout his football career: