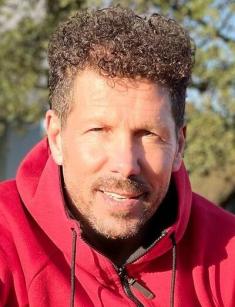 Diego Pablo Simeone Gonzalez, who was born on the 28th of April 1970, is an Argentina-native professional football midfielder. Currently, he is no longer a player but the manager of Atletico Madrid. He is of Argentinian nationality and mixed ethnicity.

Diego is from Buenos Aires, Argentina. He was raised in an ordinary family. His mom, Maria, was a hairdresser, while his dad, Don Carlos, was a footballer. Diego spent his childhood playing football with guys on the street and then started doing it professionally. He was raised along with his sister; her name is Natalia, and she is currently a professional football agent. When Diego was 19, he met his future wife, Carolina, in one of Argentina's clubs.

Diego's coach called him "Cholo" when he was 14 because his aggressive play reminded him of a former Boca Juniors star. Diego began his career at Vélez Sarsfield before moving to Italian Serie A team Pisa in 1990. In 1997, he returned to Serie A with Inter Milan, where he played two full seasons, winning the UEFA Cup in 1997-98 with a team led by Ronaldo up front. Diego returned to Atlético Madrid in 2003 after canceling his contract with Lazio. He spent the following two seasons there. He appeared in 165 games for Atlético, scoring 31 goals. Diego's departure from Europe and return to Argentina to end his playing career with Racing Club was confirmed in December 2004.

Diego finished his playing career at Racing Club, playing his final match on February 17, 2006, and then took over as manager. After a shaky start, the squad finished second in the 2006 season. When a new club president was elected in May 2006, Diego quit racing and was replaced by Reinaldo Merlo. Diego was named head coach of Estudiantes de La Plata on May 18, 2006.

As of November 2022, Diego is currently married to Carla Pereyra. Their June 2019 wedding was a big surprise for family and fans. Diego is a happy father of five children. His three sons, whose names are Guliano, Gianluca, and Giovanni, are all footballers. Diego's daughters are Valentina and Francesca. In the past, Diego was the husband of Carolina Baldini. Their marriage lasted for about 20 years, from 1994 until 2014.

Here is the list of honors Diego received throughout his football career: