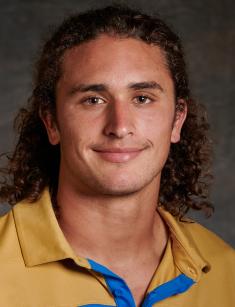 Greg Dulcich is an American football player. He's a tight end for the Denver Broncos of the National Football League.

The future celebrity was born on March 26, 2000, in Glendale, California and spent his early years there.

His mom's name is Anna. His dad's name is George. The sportsman has two elder sisters and one elder brother. He has never publicly revealed any other details about his childhood and family.

Apart from football, he's good at tennis and basketball. In his free time, he enjoys playing video games and watching Star Wars.

Greg started a serious football career with a very decent background. He was the No. 78 recruit in his home state and a three-star recruit by ESPN. Derek Sage, a Washington State coach, discovered him. After Derek moved to UCLA, Greg followed him.

In his first year at the university, Dulcich participated in three games. The next year, he took part in 11 matches. He acted as a receiver and became a member of special teams.

In 2020, UCLA made a present for this sportsman's birthday. They informed him about the fact that they gave him a scholarship. That was a breakthrough year for Greg — but unfortunately, his career progress slowed down a bit because of the COVID-19 pandemic. Nevertheless, he became his team's leader in touchdowns and receiving yards.

The next year, he was selected as the top-performing tight end in the whole country. Plus, he got the first-team All-Pac-12 award.

The Denver Broncos took him in the third round of the NFL Draft after the end of the season. He became the third tight end chosen during that session.

The beginning of his professional career was a bit humble. He had to spend some time on injured reserve because of a hamstring injury. He couldn't practice properly in the training camp. Greg debuted in the NFL in the sixth week.

His stats are always impressive. He's a very popular character in fantasy sports games. The other well-known sportsmen he's most often compared to are Dalton Schultz, Taysom Hill, Kyle Pitts from Cincinnati Bengals, Mike Gesicki and Albert Okwuegbunam. His net worth is reported to reach $3 million.

Since high school, the star has been dating Bobbie Byrne. You can see many of her photos on his social profiles.