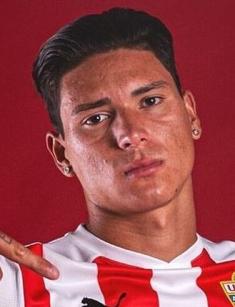 Darwin Gabriel Núñez Ribeiro, who was born on June 24, 1999, is an Uruguay-native football striker. He currently plays for Premier League club Liverpool and, at the same time, for the Uruguay national team. Darwin is of Uruguayan nationality and mixed ethnicity.

Darwin trained in Penarol's academy, where he made his debut in the Primera Division.

Darwin was born into a poor household in Artigas. His mother, Silvia Ribeiro, sold milk bottles, while his father, Bibiano Núñez, worked as a contractor. Before being discovered at the age of 14 by former Uruguayan international football player Jose Perdomo and going independently to the nation's main city of Montevideo to join the ranks of Penarol, he played for regional clubs La Luz and San Miguel. He sustained a cruciate ligament injury at the age of 17, which prevented him from working for nearly a year and necessitated two procedures.

Darwin graduated from Penarol's youth program and was elevated to the main team. He signed up with Spanish Segunda División team Almera in 2019 for a club record sum. He was acquired by Benfica in 2020 for a club-record transfer fee of €24 million, making him the most expensive player ever acquired in Portuguese football. He was then acquired by Liverpool in June 2022 for a sum of €75 million.

He replaced Peñarol as a second-half replacement in the Primera Division in 2017, making his first-team debut. He underwent a second knee surgery.

Darwin was signed to a five-year deal by Spanish Segunda División club Almera on August 29, 2019, for a cost of US$4.5 million + $1.5 million in variables. He made his debut on October 3 in a 4-2 league game as a halftime substitute.

He signed a five-year contract with Portuguese club Benfica on September 4, 2020, for a club-record sum of €24 million.

He was voted the game's MVP after helping his team overcome the home team Sporting 2-0 on April 17 in the Derby de Lisboa. In his final game for the team, a 1-0 home loss to rival Porto in the O Clássico on May 7, as they won the league title, he scored a goal that was disallowed by VAR. With 26 goals in 28 league games, he concluded the season as the league's leading scorer and was voted Player of the Year. He received the Bola de Prata trophy.

Darwin is a native Spanish speaker. But he also speaks Portuguese. He is married to Lorena Manas. In 2021, they welcomed a child who was named after his dad, Darwin.

Here is the list of honors Darwin received throughout his life: