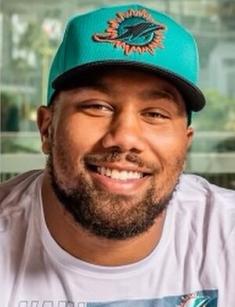 Bradley Austin Chubb who was born on June 24, 1996 is an American professional football player. He is currently an outside linebacker for the Miami Dolphins football team. Bradley started his professional career at North Carolina State University and was drafted by the Denver Broncos in 2018.

The Miami Dolphins rising star hails from Austell, Georgia. His parents' names are Aaron and Stacey Chubb. Bradley's father and brother both were professional football players. He is also related to running back for the Cleveland Browns, Nick Chubb. Bradley and Nick are cousins. Despite being relatives, the two first met only in 2013 when Bradley started playing college football. Besides his parents and brother, Bradley is close to his grandparents and even shared photos of them on his Instagram page.

Chubb started his career as a hybrid linebacker-defensive end at Hillgrove High School. After receiving offers from Duke, West Virginia, Wake Forest, East Carolina and many other top schools, he chose North Carolina State University. As a freshman student, he proved to be a capable linebacker that primarily played on special teams. During the next year, he switched to defensive end and won the Carey Brewbaker Award as the best defensive lineman of the year. As a senior, Bradley was named one of the top returnees for 2017 by Pro Football Focus.

In the 2018 NFL draft, Chubb was selected by the Denver Broncos. He signed a four-year contract with a 17 million signing bonus. During his time on the team, Bradley faced the Seattle Seahawks, Baltimore Ravens, Arizona Cardinals, New York Jets and many other legendary football teams. His coach at the time was Bill Belichick. Chubb played for the Broncos for five seasons. His stats were 105 solo tackles, 63 assists, 26.0 sacks, 1 fumble recovery and 1 interception.

At the end of October 2022, trade rumors suggested that Chubb might join Los Angeles Rams, New York Jets or Tennessee Titans. However, the Broncos made the decision to trade Bradley Chubb to the Miami Dolphins. The team is scheduled to play with the Cleveland Browns on 13th November.

The Miami Dolphins outside linebacker is in a relationship with a woman named Bria. There is not much known about their love story, but Bria often shares photos of them together on her Twitter account.

On his Instagram page, Bradley promoted Snickers and Old Spice. In 2018, he also signed a shoe and apparel contract with Adidas.

In 2021, Chubb underwent ankle surgery after being injured on the field. From 2017 to 2022, he sustained six different injuries, including three pedal ankle sprains and a shoulder injury.

Bradley Chubb has a 17-32 record as a starter in his career.