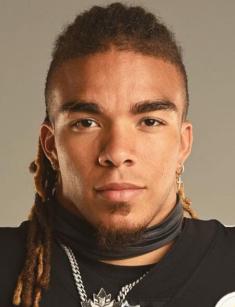 Chase Claypool, an American football wide receiver from Canada caught the attention of the media multiple times. An overall talented athlete has a promising future and a great chance to become a star.

He was born on July 7, 1998 in Abbotsford, Canada to John Mensah and Jasmine Claypool. He grew up with four brothers, two stepbrothers, and a sister. As a teenager, he loved BMX bikes and basketball. In fact, the night before sending a letter of intent to join a college football program, he played in a basketball game and scored 51 points.

A system of adults supported the children in his neighborhood, and this was very helpful, because Chase's mother had to work a lot. Most of his family are into karate and gymnastics. One of his siblings played football for the University of British Columbia and recommended Chase choose this sport.

A traumatic event happened in the family when Chase was only 13. His sister very unexpectedly took her own life. The boy had to process this tragedy at a quite a young age. He decided to use this as a motivator to work harder. He has a tattoo on his right arm in his sister's memory.

At the age of 16, Chase received offers from more than a dozen colleges. He made a choice to play football for Notre Dame.

In the 2020 NFL Draft Pittsburgh Steelers selected Claypool and signed a four-year rookie contract with him. His performance was spectacular. During week 5, he scored four touchdowns in a game, thus becoming the first Steeler rookie to do so. Claypool's contract expires in 2024, after which he becomes a free agent.

Chase Claypool can be compared to other wide receivers such as Amari Cooper, Antonio Brown, Aj Green, Adam Thielen or Antonio Gibson. In some sources, he is even called a successor of Antonio Brown, who also played for the Steelers.

In 2019, Chase Claypool dated Kennedy Minko, but it is unknown whether they are still together.

Claypool is quite active on social networking sites and has a Youtube channel. He collaborated with an influencer Mia Mastrov. He also has merchandise: you can buy apparel on a special website.

In August 2020, Chase bought each of his parents a car. This was his childhood dream come true.

Claypool does not stop setting new records. In 2019, he was a number one receiver in college.

According to PFF grades, he was the Steelers' best receiver in week 5, 2021.