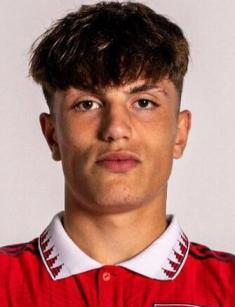 Alejandro Garnacho Ferreyra, who was born on the 1st of July in 2004, is a Spanish native footballer. Currently, he plays as a winger for the Manchester United football club (Premier League). His nationality and ethnicity are both Spanish. Alejandro is better known for playing in Manchester United's youth system and for winning the FA Youth Cup and the Jimmy Murphy Young Player of the Year award.

Alejandro was born in Madrid, which is a city located in Spain. He has played football since his early ages, and in 2015 he first joined Atletico Madrid's youth system. The details about his childhood and youth are really hard to find on the Internet. Maybe Alejandro will tell us about his personal life a little more soon.

Alejandro started his professional football career right after he signed his first contract with Manchester United Academy, which happened in 2021 when the footballer was only 17 years old. Alejandro scored on his own in the FA Youth Cup victory over Everton to kick off his football career. For February 2022, the goal was a candidate for Manchester United's Goal of the Month award. Alejandro replaced Anthony Elanga on April 28, 2022, in United's first-team debut after being listed as an alternate for the Premier League games. In May 2022, he also received the Jimmy Murphy Young Player of the Year award. Then, on May 11, 2022, he scored twice against Nottingham Forest in the FA Youth Cup final to help United win the match for the first time since 2011.

Alejandro started wearing shirt number 49 rather than 75 for the 2022 and 2023 Premier League seasons. Later, on October 4, 2022, the player gave Manchester United U21 the 2022–23 EFL Trophy with a dramatic last-second goal. Alejandro made his first senior start for United on October 27 in a 3-0 win over Sheriff Tiraspol in the UEFA Europa League, following brief substitute appearances against Brighton & Hove Albion, Brentford, and Real Sociedad. After the game, manager Erik ten Hag praised Alejandro for his growth over the previous few weeks. Alejandro scored his first goal as a senior on November 3rd against Real Sociedad in a Europe League game.

Alejandro is a young footballer who has an Instagram account. There he posts various pictures of himself and his family and makes Instagram stories. Alejandro has about 2.3 million followers. According to his friends, he prefers to spend holidays in Spain. Alejandro often collaborates with Nike Football and appears in various sports magazines. Alejandro is a big fan of Messi, whom he met once.

Here is the list of honors Alejandro received throughout his football career: