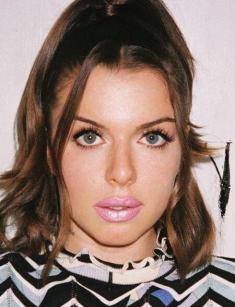 Julia Fox, who was born on the 2nd of February, 1990, is an Italian-born American actress. Julia is better known for her various roles on TV, such as Uncut Gems, Paradise, and No Sudden Move. Julia was even nominated for the 2019 Gotham Awards and the Breakthrough Actor Award.

Julia is from Milan, Italy. Her mother is Italian by nationality, while her dad is American. In her childhood, Julia lived with her grandfather until she turned six when the family moved to New York City. She started living in Manhattan with her dad, but in 2004 she relocated back to Italy. In Manhattan, she went to high school.

Julia started her modeling career back in 2015 when she first appeared on the cover of Playboy magazine. Since then, she has appeared in editorials for CR Fashion Book, The Last, Office, Wonderland, Vogue, and Interview, as well as campaigns for Diesel, Coach New York, and Supreme.

In the 2019 Safdie Brothers’ Netflix movie Uncut Gems, Julia makes her feature movie debut in the role of Howard Ratner's mistress, a mercurial jewelry trader, and gambling addict. She first met Josh Safdie by coincidence at a café in Manhattan's SoHo and had been friends with the Safdies brothers ever since. In the 2019 Gotham Awards, Julia was subsequently nominated for Breakthrough Actress. By the way, the next drama, Puppet, which is scheduled for release in 2022, will feature Julia. She will also play Hollywood hairstylist Carrie White in the forthcoming movie Upper Cut, which is based on White's autobiography. It was revealed in March 2022 that Julia would act alongside Vito Schnabel, who also writes, Steven Van Zandt, and Tony Kaye in the dark comedy The Trainer.

Julia has been in a relationship with Peter Artemiev since November 2018. In February 2021, they both welcomed a son, even though they separated in 2020. By the way, in 2022, Julia confirmed that she was involved in a relationship with rapper Kanye West. This year, after a couple of months of dating, they broke up.

Julia also appeared in two music videos for the songs "Jackboys" (2019, by JackBoys) and "Nothing Good" (2020, by Goody Grace, featuring G-Eazy and Juicy J).

Here is the list of awards Julia has been nominated for throughout her career:

None of these awards were won.