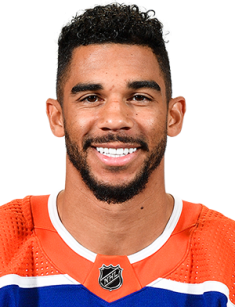 Evander Kane is a professional ice hockey player for the NHL team Edmonton Oilers. He is known for being confident, tough, and competitive. Kane took part in international tournaments and won several gold medals. However, his violations of NHL protocols and multiple domestic violence allegations have negatively influenced his career.

The player was born on August, 2, 1991 in Vancouver, Canada. His father Perry is a former hockey player. He was also fond of amateur boxing when he was younger. His mother Sheri used to play volleyball in college. Kane has two sisters named Brea and Kyla.

In 2006, Kane was drafted by the Vancouver Giants and began playing amateur hockey. Three years later, he was selected by the Atlanta Thrashers and signed a contract with them.

He scored a point during his first game in October 2009. Later, he missed several games due to an injury. In 2011, the team was bought by a Canadian entertainment company and became the new Winnipeg Jets.

In 2015, the Jets traded Evander and several other players to the Buffalo Sabres. He played for three years until he was traded to the San Jose Sharks.

In 2021, he was suspended for non-compliance. In early 2022, the team canceled his contract for violating their protocols. There was arbitration to determine whether it was properly terminated.

In January 2022, Evander signed a contract with the Oilers. During his debut, he scored a goal and helped the team win against the Montreal Canadiens. In November, he underwent a surgery after Patrick Maroon skated over Kane's wrist by accident.

In 2018, Evander married Anna Kane. Their first baby was born at 26 weeks and died in March 2019. In 2020, Kane's wife gave birth to their daughter, Ava. A year later, Anna filed for divorce and accused him of domestic violence and cheating.

Patrick Kane, an American player, was also criticized by the press. In one of his interviews, he wished Evander all the best.

According to some news sources, he is in a relationship with model Mara Teigen. They were dating in 2015. Once, after having an argument, Kane bought a gigantic billboard to apologize to Mara.