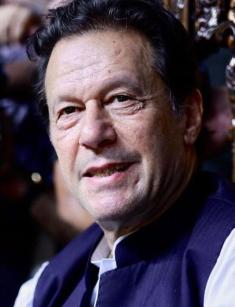 Imran Khan is a Pakistani politician. Please don't confuse him with his two prominent namesakes. The first one is an Indian-American actor, a star of Bollywood movies. The second one is a Dutch-Pakistani singer — one of his top bangers is called Amplifier.

The future celebrity was born on 5 October 1952, in Lahore. He has four female siblings. His family was rather affluent. As a young kid, Imran used to be calm and timid.

His mom's name is Shaukat Khanum. His dad's name is Ikramullah Khan Niazi. Both are of Pashtun ethnicity.

Imran became a successful cricket player at Oxford where he received his higher education. After coming back to his homeland, he joined the national team. In 1982, he became its captain.

In 1996, he registered the Pakistan Tehreek-e-Insaf party. He failed to win the first election that he took part in — but won the one that took place in 2002. Around 2011, he began to criticize the government.

In 2018, Imran became Prime Minister of Pakistan. He wanted his homeland to develop as a humanitarian state on the foundation of Islamic traditions and concepts. China, the US, India and Afghanistan became the paramount priorities of his external policy.

Khan left the position of PM in 2022. The same year, he organized the Azadi march, alternatively dubbed the long march, to rail against the new government.

In 1995, Imran tied the knot with Jemima Marcelle Goldsmith, a British journalist. Her dad was one of the wealthiest individuals in the country. The couple welcomed two sons: the elder in 1996 and the younger three years later. Princess Diana visited this family twice in Pakistan. Hasnat Khan, Imran's distant cousin, was rumored to be the love of Diana's life. Jemima failed to adapt to living in Pakistan. The couple divorced in 9 years and she went back to her homeland together with the boys.

In 2015, Imran married Reham Khan, a Pakistani journalist and TV anchor of British origin. He divorced his second wife in 9 months.

In 2018, he went down the aisle again. His current partner is Bushra Bibi. Previously, she used to be Imran's spiritual mentor. She has five kids from her previous partner.

In November 2022, a gunman shot Imran in the leg. This person believed the politician was "spreading hatred". Imran's condition was not critical but another person was shot dead and eight were wounded.