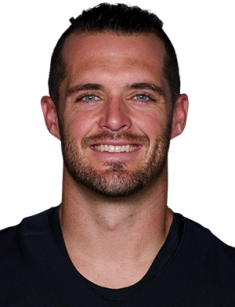 Derek Dallas Carr who was born on March 28, 1991 is an American football player of the National Football League. After playing college football at California State University, Fresno, he joined the Las Vegas Raiders as a quarterback. As of 2022, he is the 13th highest paid quarterback in the league.

The football sensation hails from Bakersfield, California, where he spent the major part of his childhood and youth. The footballer's family also lived in Texas for a while before moving back to Bakersfield. Derek's parents' names are Sheryl and Rodger. He is their youngest child. Derek's brother, David Carr, is a professional footballer and an NFL star as well.

Inspired by the success of his brother David, Derek took the first steps toward his career as a football player at Sugar Land High School, Texas. During his junior year, he was already being heavily recruited by colleges in California, Texas, Idaho and Utah. In 2008, Derek was transferred to Bakersfield, which historically has a good football program.

In 2009, Derek began attending Fresno State University and joined its football team, Fresno State Bulldogs. His stats for the starting seasons with Bulldogs were 12,843 passing yards and 113 touchdowns.

During the second round of the 2014 NFL draft, the player was selected by the Oakland Raiders (later known as Las Vegas Raiders). In 2016, he replaced Aaron Rodgers in the 2016 Pro Bowl. A year later, he secured a five-year contract extension. In the 2017 season, he threw a career-long 87-yard touchdown pass to the Raiders' wide receiver Amari Cooper.

In October 2022, news media reported that Derek sustained a back injury that impacted his performance on the field. Carr gave an interview on November 3rd and assured his fans that he is already feeling better.

During his career, Carr faced such players as the legendary Super Bowl champion, Ben Roethlisberger and Carolina Panthers's Baker Mayfield.

Derek is happily married. His wife's name is Heather Neel and she is a former cheerleader. The couple met when they both were college students and tied the knot in the summer of 2012. Derek and Heather have three sons and one daughter. Their oldest child required several surgeries after birth, but currently enjoys a happy and healthy life.

Carr is a very religious person and has several tattoos dedicated to his faith.

He is best friends with his Raiders' colleague Davante Adams. In September 2022, Adams shared that he and Derek almost died in a boating accident a few years back, which brought them even closer.

In September 2019, Derek had an online feud with his fellow Raiders player, Antonio Brown.

During his time in the Raiders, the footballer set several franchise's all-time records. They include 31,700 passing yards, 30 game-winning drives and 193 passing touchdowns. Carr is also the Raider's leader in games with multiple touchdown passes.