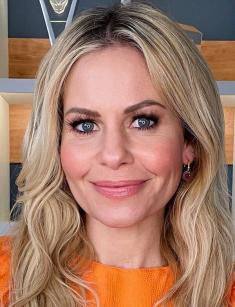 Candace Cameron Bure, who was born on the 6th of April 1976, is a California-born social media influencer, actress, producer, and author. Candace is better known for her role in the Full House and Fuller House TV shows.

Candace was raised in Panorama Bay, a city in the state of California, with three siblings named Kirk, Bridgette, and Melissa. Her parents are Barbara and Robert Cameron. Her dad was a sports coach, while her mom worked as a talent manager. Candace has been acting since she was five. At that time, she appeared in many TV commercials.

Candace played in many projects, such as Fuller House, Full House, Christmas Under Wraps, and Aurora Teagarden Mysteries. She first debuted in the St. Elsewhere television series, which happened in 1982. She gained a lot of fame right after she appeared in the Full House TV series. This show was a big sensation, so Candace quickly became popular among show fans. By the way, Candace hosted Nickelodeon's KCA. In 2014, she appeared as herself on the Dancing with the Stars show. On this show, she worked with choreographer Mark Dallas.

Since 1996, Candace has been married to Valeri Bure, who is a Russian-American hockey player. Candace has three children: Natasha, Maksim, and Lev. Candace has faith in the Christian religion. By the way, she is conservative and Republican. In 2022, Candace gained a lot of hate on social media because she thinks that families in the US should be traditional. She spoke against LGBT people on television. Many celebrities, including JoJo Siwa, said that her announcement was rude and hurtful to the LGBT community.

Here are Candace's nominations that she won:

She also was nominated for Daytime Emmy Awards and Young Artist Awards.