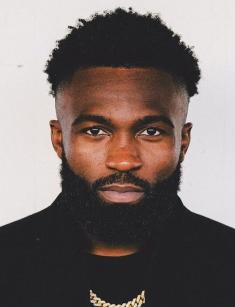 Eno Benjamin, who was born on the 13th of April 1999, is a Texas-born footballer. Eno is best known for his work as a running back for the Arizona Cardinals and the Arizona State Sun Devils. Now Eno is a player for the Houston Texans (NFL).

Eno was born in Dallas, Texas. Not much is known about his family. The only information about his childhood available is that he studied at the high school in Wylie East, and then he enrolled at the university in Iowa. He began his college career with a local college football team before transferring to Arizona State University. According to his Instagram, Eno's mom's name is Helen. In one of his stories, he had the word "Helen" tattooed on his arm.

Eno played in 10 games at Arizona State in 2017, accumulating a total of 23 carries for 142 yards and a touchdown. Eno produced 119 return yards as a punt returner on the special teams in 2017. Eno established the school record for most running yards in a game with 312 during his sophomore year in 2018. The football player chooses to forgo his senior year and declares for the 2020 NFL Draft after his junior year, during which he carried for 1,083 yards and 10 touchdowns.

His professional career began when the Arizona Cardinals made him their seventh-round choice in the 2020 NFL Draft, with the 222nd overall pick. As a rookie, Eno did not participate in any games. He was, incidentally, ranked third on the Cardinals depth chart going into the 2021 campaign, behind James Conner and Chase Edmonds. Eno, who filled in for Edmonds in Week 9 against the San Francisco 49ers, scored his first running touchdown in the NFL. Through nine games, Eno ended the season with 118 yards and a touchdown. Eno spent the first 11 weeks of the 2022 season with the Cardinals before being released on November 14, 2022.

Eno was taken off waivers by the Houston Texans on November 15, 2022. He also scored 111 touchdowns while rushing for 7,546 yards in high school. Prior to switching to Arizona State University, Benjamin made a collegiate football commitment to the University of Iowa.

Eno prefers not to talk much about his personal life. He is a very low-key footballer. But he has an Instagram account with over 34K followers. Eno has several tattoos on his arm. Also, Eno is a very religious man who believes in God.

Here is a list of Eno's accomplishments throughout his career: