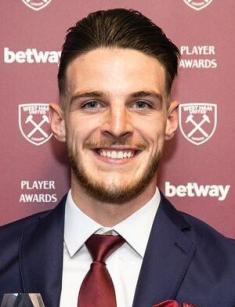 Declan Rice who was born on January 14, 1999 is a professional British football player. He is currently a defensive midfielder and vice-captain for Premier League club West Ham United. Rice is also a part of the England national football team. Prior to that, Declan represented Ireland on the international level.

The football player hails from the historic town of Kingston upon Thames. His father, Sean, is Irish. In 2020, Declan dropped his current agent and appointed his father instead. Since then, Sean Rice has been managing his son's career. He was very disappointed when Declan decided to join the England national team instead of representing Ireland. Nevertheless, Sean remained his son's agent. Declan's mother, Teresa, is English. He also has two brothers.

At the age of seven, Rice signed up for the academy of Chelsea football club, where he remained for the next seven years. Right after parting ways with Chelsea, he became a part of West Ham United's youth team. Rice also represented the Republic of Ireland on the youth level at the time. Just twelve months later, Declan secured his first contract with West Ham United as a professional player. The 2017-18 season was a major event for Rice, who established himself as an invaluable part of the legendary team and signed a new contract, according to which he will remain in West Ham until at least 2024.

In February 2019, Declan also joined the England national team to represent his country on the international level.

In 2021, it was reported that Rice was on Chelsea's wish list alongside Aurelien Tchouameni, but the transfer never happened. According to the Transfermarkt website, legendary Manchester United, too, contemplated acquiring the player, but never went forward with their plans. Manchester City was rumored to be interested in Rice as well.

In May 2022, Rice's achievements were once again recognized by football lovers when he was named in the FIFA 22 Premier League Team of the Season.

The West Ham vice-captain is in a relationship with a woman named Lauren Fryer. Declan and his girlfriend have been together since 2015. The couple has one child and also owns a dog. Lauren can be often seen at her boyfriend's games and is very supportive of his career.

Rice also loves spending time with his nephew, who is sometimes mistaken for his son.

Rice is best friends with Chelsea star Mason Mount. They met when they both were 12 years old and have been inseparable since then. He is also good friends with Manchester City sensation Jack Grealish.