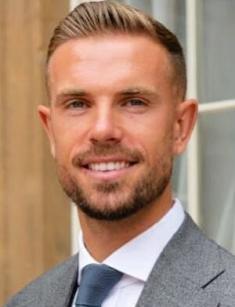 Jordan Henderson who was born on June 17, 1990 is a British football player. He is currently a midfielder and captain for the professional football club Liverpool of the Premier League. Jordan also takes pride in being a part of the England national football team. He mostly plays as a central midfielder or a central defensive midfielder.

The Liverpool star was born and raised in the port city of Sunderland, Tyne and Wear, England. His parents' names are Brian and Liz. His father is a retired police officer and his mother works in the fitness industry. The football player also has a little sister named Jody. Many people think that Nottingham Forest goalkeeper Dean Henderson is Jordan's brother, but they just share the same last name and are not related.

Jordan began playing football at the age of eight when he became a part of the Sunderland A.F.C. club's youth team.

Ten years after joining Sunderland's youth system, Jordan signed a professional contract with the club and became a part of its senior team. He made his first-team debut in November 2008. The midfielder played for his hometown club from 2008 until 2011. He also spent 6 months on a loan deal at Coventry City club.

In June 2011, Jordan was transferred from Sunderland to Liverpool for an impressive fee of £16,000,000. His manager at the time was Brendan Rogers. In 2015, Henderson became the team's captain for the first time. Since then, he has won the UEFA Champions League, UEFA Super Cup, and FIFA Club World Cup.

Jordan was widely criticized at the beginning of his career with Liverpool, with Sir Alex Ferguson being one of his fierce critics.

Jordan is happily married to a woman named Rebecca Burnett. Born in England, Rebecca spent her childhood in the US because of her parents' jobs. The Burnett family moved back to their home country when Rebecca was a teenager. She and Jordan met shortly after that. In 2014, Jordan and Rebecca welcomed their first child, Alexa. A year later, their second daughter, Alba, was born. The couple also have a son that was brought into this world in 2020.

He is close friends with former Liverpool star Adam Lallana.

In October 2022, Jordan made headlines when he had an altercation with Arsenal defender Gabriel Magalhaes, whom he called an idiot. He also got into an explosive argument with Bruno Fernandes just a few months before that.