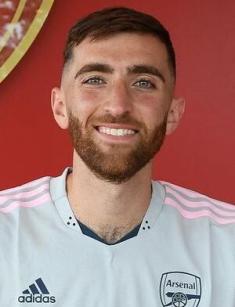 Matthew Charles Turner who was born on June 24, 1994 is an American professional soccer player. He is currently a goalkeeper for the Premier League club Arsenal. He also plays for the United States men's national soccer team and takes pride in representing his country in international competitions.

The Premier League star was born and raised in Park Ridge, New Jersey. He attended a Catholic high school. Matt's parents' names are Cindy and Stu. He also has two older sisters. One of them, Michelle, is a nurse in New York and was on the frontline when the pandemic started in the city. Matt considers his sister a hero. The goalkeeper is of Lithuanian and Jewish descent. Matt and Stu recently got Lithuanian citizenship.

Unlike many soccer players who found a passion for the sport early in life, Matt was initially playing basketball and baseball. Turner began taking interest in soccer when he was in middle school. After graduation from high school, Matt decided to pursue college. He enrolled at Fairfield University and joined its soccer team, Fairfield Stags. Turner was part of the team from 2012 until 2015. During that time, he also briefly played for the Premier Development League team Jersey Express. In 2014, Matt led the team to the national semifinals.

In spring of 2016, Turner joined the Major League Soccer club New England Revolution. In April of the same year, he joined the Richmond Kickers team on a loan deal. Matt debuted in a game with Toronto FC II, which faced a devastating defeat. After a year on with Kickers, Turner came back to the New Englands and became the club's number one. Between 2016 and 2022, Turner earned 102 appearances for the New England and 27 appearances for the Richmond Kickers.

In February 2022, Arsenal FC decided to acquire Turner, paying a £5.8 million transfer fee. In June of the same year, Arsenal signed Turner for a long-term contract. He made his debut with the club in a game against 1. FC Nürnberg. In October 2022, the player gave an interview in which he praised his teammates Aaron Ramsdale, Bukayo Saka and Rob Holding. Matt's 2022-23 season stats are 4 clean sheets and 4 goals conceded.

In 2022, Matt married a former cheerleader and Harvard graduate, Ashley Herron. The Premier League star's wife is also a founder of a non-profit organization, which helps breast cancer survivors. Matt and Ashley had their first child in June 2022. The couple also owns two dogs.

The soccer player is sometimes confused with Big Brother star Matthew Turner, with whom he shares last and first names.

In 2020, Matt received the Revolution team MVP and Player of the Year titles. A year later, Turner was awarded MLS Goalkeeper of the Year. He is also the 2021 CONCACAF Gold Cup Best Goalkeeper title holder and won the Man of the Match award in the MLS All-Star game.