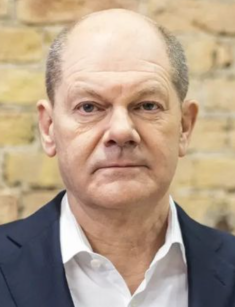 Olaf was born into a well-established German family from Osnabrück, a city that is located in Lower Saxony. Even though he was born there, the majority of his childhood was spent in Rahlstedt, which is a district of Hamburg. His dad was a trade agent. Olaf studied at Hamburg's high school and then attended the university, also in Hamburg. There, Olaf studied law and then started working at a law firm. Olaf was raised along with his younger siblings, Jens and Ingo. When he was 17, Olaf became a member of the Social Democratic Party.

Scholz received 395 votes to win the election for Federal Chancellor of Germany on December 8, 2021. He succeeded Gerhard Schröder as the second chancellor in German history to take the oath of office without mentioning God. He started his first international trip after taking the oath of office, following the "traditional inaugural route" of Paris-Brussels-Warsaw. Olaf has faced challenges such as the Russian invasion of Ukraine, an energy crisis, increasing prices, and a severe summer drought since assuming office. All of these causes have pushed the greatest economy in Europe to the verge of recession. An INSA survey found that by the end of August 2022, 62% of Germans had changed their minds regarding Scholz's actions as chancellor.

Britta Ernst, a fellow SPD politician, is Olaf's wife. He and his wife have no children, and it is unknown if they even will have any in the future.

Scholz was brought up in the orthodox German Evangelical Protestant Church, although he eventually defected. Scholz is the first chancellor of the Federal Republic of Germany who does not belong to a church and the second chancellor after Gerhard Schröder to take the oath of office without making any mention of God at his inauguration in 2021.

Here is the list of achievements that Olaf received throughout his political career: