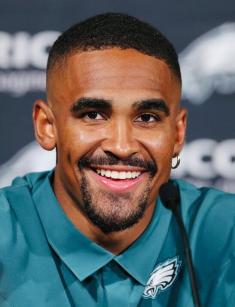 Jalen Alexander Hurts who was born on August 7, 1998 is an American professional football player. Hurts gained fame after he joined the Philadelphia Eagles team of the National Football League (NFL) as a quarterback. Before that, he was a college football player at the universities of Alabama (2016-2018) and Oklahoma (2019).

The star quarterback hails from Houston, Texas. His parents' names are Pamela and Averion. Jalen's dad coaches football players, so he was raised in a family that is very passionate about the sport. Pamela once mentioned in an interview that her son learned a lot while watching his father do his job. Jalen also has a sister named Kennedy and a brother named Averion.

The future NFL star achieved impressive results playing high school football for the Channelview Falcons . In 2015, he committed to the University of Alabama and became a starting quarterback for its football team, Alabama Crimson Tide. In 2016, Jalen led the team to win the SEC Championship. Two years later, he also secured the team's victory in the SEC Championship Game

At the beginning of 2019, Hurst announced his transfer to the University of Oklahoma. As a part of its football team, Jalen achieved a single-game yardage record, when he put up 508 yards of total offense against the Houston Cougars.

In 2020, Hurst was picked by the Eagles during the second round of the NFL draft. He was offered a four-year contract with the team, which he happily signed. On October 17, 2022, Hurts led the Eagles to a big win over the Dallas Cowboys.

Currently, the quarterback has one year remaining on his rookie contract. ESPN's analyst Dan Graziano believes that Hurts is an essential part of his team and his new contract with Eagles should be similar to Kyler Murray's five-year, $230 million contract.

One of the most discussed and promising quarterbacks of the 2022 season is currently single. His previous girlfriend's name is Bry Burrows, and she is an IT professional. The couple met when they both attended the University of Alabama and were in an on-and-off relationship for several years. Jalen and Bry officially broke up in 2019.

Hurts doesn't have any children, but wants to inspire kids to follow in his footsteps. In the summer of 2022, he held a camp and emphasized gender equality.

Football isn't the only sport the Eagles star is passionate about. In high school, he also competed in powerlifting.

Jalen is close friends with another star football player, Travis Kelce. He was featured on the Kelce’s podcast in 2022.

In 2016, the quarterback was titled SEC Offensive Player of the Year. He was also named Freshman of the Year. A year later, Hurts became the CFP national champion. His other achievements include being named Big 12 Offensive Newcomer of the Year (2019) and becoming Oklahoma's 5th player to make it to Heisman Trophy finals in four years.