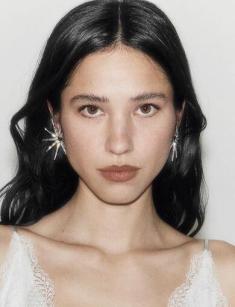 Kelsey Asbille Chow, who was born on September 9, 1991, is a South Carolina-born actress. She is better known for her roles in such projects as Yellowstone, One Tree Hill, Teen Wolf, Wind River, and many others.

Kelsey was raised in a well-established family from South Carolina. She spent her entire childhood in the city of Columbia. Her dad, James Chow, is Chinese by ethnicity, while her mom, Jean Chow, is an American native. Kelsey is not the family's only child; she was raised alongside her younger brother Forrest and her sister Kiersten. Kelsey studied at a private school in Columbia. After graduating from there, Kelsey enrolled at the university, which is also located in Columbia, SC. Then she became a major in human rights. Kelsey played a lot in a community theater; when she was about 13, she got her debut role in the One Tree Hill TV show.

After obtaining experience in community theater, Kelsey received her first television job in 2005, playing the recurring character of Gigi Silveri on One Tree Hill. She appeared on the program from 2005 until 2009 at the age of 13. She appeared as a guest on The Suite Life of Zack & Cody in 2008. In the Disney Channel original movie Den Brother, she also had a supporting role. Kelsey Grammer co-starred in the Disney XD original series Pair of Kings from 2010 to 2013 as Mikayla. Kelsey appeared in The Amazing Spider-Man in 2012 and was afterward cast in the major motion picture Run. She was given a role in the 2014 Fox drama Hieroglyph. But the show was canceled before it had started. Then, in 2015, Kelsey made a return appearance as Tracy Stewart on Teen Wolf's fifth season. It's noteworthy to note that Kelsey Chow is included for all of her screen credits up to 2017. She has been credited as Kelsey Asbille for the majority of her roles since that time, including Wind River, Yellowstone, and Fargo.

Since Kelsey's dad is Chinese, she's almost fluent in the Chinese language. Since 2021, Kelsey has been in a relationship with the British actor William Mosley. Even though Kelsey is based in Los Angeles, California, sometimes she moves to New York for a while.

Here is the list of movies and TV shows where Kelsie has appeared throughout her career: