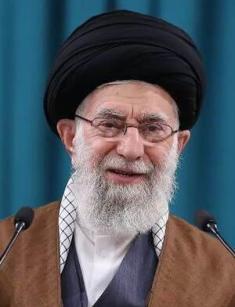 Sayyid Ali Hosseini Khamenei who was born on April 19, 1939 is an Iranian cleric and politician. Since 1989, he has served as the Supreme Leader of the Islamic Republic of Iran. From 1981 until 1989, Khamenei also was a president of the country.

The future cleric hails from the holy city of Mashhad, which is located in the province of Khorasan. He was the second son of a poor Islamic scholar Sayyid Javad Khamenei and his wife Khadijeh Mirdamadi. Khamenei also has seven siblings. He is of Azerbaijani and Persian descent. Khamenei's childhood was full of deprivation and difficulties. The family often had nothing to eat, except bread. Despite that, the future supreme leader and his siblings grew up to be respectable people. Three of Khamenei's brothers are also clerics.

As a young man, Ali was a diligent student. He was fascinated by such scholars as Ayatollah Hakim and Ayatollah Shahroudi, whose lessons he attended. Khamenei also studied law and philosophy.

In 1962, Khamenei became a part of the religious opposition movement founded by his mentor, Ayatollah Khomeini. He was actively involved in the protests against Iranian Shah Mohammad Reza Pahlavi, which led to several arrests, torture and imprisonment.

On June 27, 1981, Khamenei survived an assassination attempt. Lucky to be alive after a bodyguard rushed to his aid, the cleric sustained a severe arm injury, the consequences of which will haunt him until the rest of his life.

In October 1981, Khamenei was elected President of Iran, becoming the first cleric to serve in the office. Four years later, he was reelected after 87% of constituents voted for him.

After Ayatollah Khomeini passed away in 1989, the Council of Experts elected Khamenei as the Supreme Leader of the Islamic Republic of Iran. He has regular meetings with the president of Iran and makes final decisions on matters of the economy, environment, domestic and foreign policies.

Khamenei's vision for Iranian foreign policy mainly revolves around a vocal opposition to the United States participation in international affairs. In 2022, Khamenei accused the country of causing the Russo-Ukrainian War and publicly expressed his support for Russian President Vladimir Putin.

In 1964, Khamenei married Mansoureh Khojasteh Bagherzadeh. They have six children. His daughter Zahra Mostafavi Khomeini earned a PhD in philosophy from the University of Tehran and often praised her father's stance on women's rights.

In November 2022, the Supreme Leader's niece, Farideh Moradkhani, posted a video online in which she criticized her uncle's regime, calling it "child-killing".

Khamenei wrote several books, including "A 250-Year-Old Person", "Islamic Thought in The Quran" and "Lessons from the Nahjul Balagha."

Khamenei's supporters believe that his greatest achievements were making Iranian army stronger to defend the country from foreign and domestic threats, and supporting oppressed Muslims all over the world.