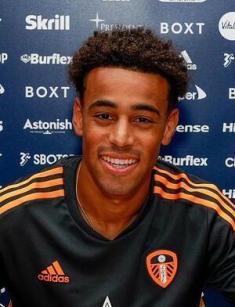 Tyler Shaan Adams who was born on February 14, 1999 is an American professional soccer player. Since 2022, he has been playing for Premier League club Leeds United as a midfielder. Tyler also recently became a captain for the US men's national soccer team.

The star was born and spent the major part of his life in Wappingers Falls, New York. He received secondary education at Roy C Ketcham High School. The player's mother's name is Melissa. Tyler has never revealed his father's name, but we do know that his parents parted ways shortly after he was born. His dad has been absent from his life ever since. Adams and his mother lived alone until he turned 13, when Melissa met his future stepfather. The midfielder's stepdad coaches soccer players. His family also includes three stepbrothers.

The future Premier League star began playing soccer when he was just six years old. He joined a neighborhood team and realized that he was talented and passionate enough to continue to pursue the sport. At the age of eleven, Tyler was accepted to the New York Red Bulls club youth division.

The promising midfielder spent five successful years at youth division, and became a part of the club's senior team. His first game was legendary for the Red Bulls because it brought them the first victory in its history.

In 2016, Adams signed to the Red Bull's first team. He debuted in a game against English club Chelsea. Tyler secured a contract with the team in November 2015. He remained a part of the Red Bulls until 2019.

In winter of 2019, Adams began playing for the German professional club RB Leipzig. Throughout his career with the club, he played 75 matches, 43 of which were victorious.

In summer of 2022, Adams was transferred to one of the largest single-city clubs in the United Kingdom, Leeds United. He was offered a five-year contract. His first game with the club resulted in a victory over Wolverhampton Wanderers.

The midfielder has represented his homeland internationally since he was fifteen years old. In 2015, he helped the US soccer team to pass qualification for the FIFA Under-17 World Cup.

In 2022, Tyler was chosen captain for the U.S. at the World Cup, becoming the youngest team captain at the tournament. When interviewed by the ESPN website, he mentioned that he considered it a huge honor.

Tyler's girlfriend's name is Sarah Schmidt. Originally from Germany, she relocated to the US to pursue a college education. The couple met and started dating in 2019.

On 30 November 2022, the midfielder was titled SBI USMNT Man of the Match. He is a German cup and CONCACAF Nations League winner. Tyler is also a USL cup and USL regular season champion.