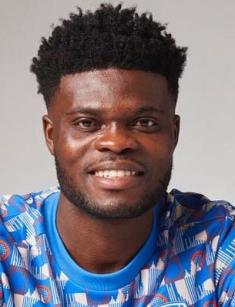 Thomas Teye Partey who was born on 13 June, 1993 is a Ghanaian-born professional football player. He is currently a defensive midfielder for the Premier League club Arsenal. Partey became a part of the Ghana national team in May 2016, and has represented his country internationally since then. He also appeared in the Amazon Original documentary series All or Nothing: Arsenal.

The future Arsenal star was born and raised in the town of Krobo Odumase, Ghana. He comes from a very poor African family. His mother sold goods at a street market. Thomas's father, Jacob, trained football players. The midfielder also has seven siblings. As children, Partey and his brother Frances spent a lot of time watching their father do his job and became passionate about football. Mr. and Mrs. Parents are very proud of Thomas's achievements and often attend his games.

The player began his football career when he joined the youth division of his hometown club, Odometah. Ever since then, he has worked toward his dream of joining a European football club.

In 2011, Partey became a part of the Spanish club Atlético Madrid C team. After showing promising results, the midfielder moved up the ladder and joined the club's B team.

Several months after first joining Atlético Madrid, the midfielder was loaned to Real Mallorca, where he remained for a year and scored his first professional goal. In July 2014, Partey was loaned to UD Almería. He was the club's midfielder for a year, and scored 4 goals during that time.

In November 2015, Thomas went back to Atlético Madrid. He scored his first league goal for the club in a game against Levante. In February 2017, Partey signed a five-year contract extension.

In October 2020, Partey was transferred to Premier League club Arsenal. An astonishing transfer fee of 45 million British pounds made him the most expensive Ghanaian player of all time. Partey signed a long-term Arsenal contract until 2024 with an option of extending it for another year. His total stats with the club are 74 appearances and 4 goals.

The midfielder's all-career goals number is 28.

In the summer of 2022, the midfielder's Moroccan girlfriend, Sara Bella, started claiming online that she had become Partey's wife. Shortly after that, Bella made news headlines when she accused the player of rape. The subject investigation revealed that the woman made false accusations because Partey rejected her marriage proposal. The charges against him were dropped.The midfielder previously dated model and entrepreneur Gifty Boakye.