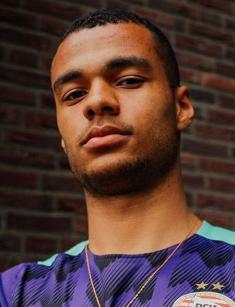 Cody Gakpo is a left-wing forward from the Netherlands. He is a rising star of PSV Eindhoven and a welcome addition to the Dutch national football team. Gakpo made headlines after scoring the winning goal against Ajax Amsterdam in the 2022 Dutch Cup final match.

Sports experts at SoFIFA describe Cody Gakpo as an aggressive, fast, adaptable left-winger who can switch to center forward position when it's needed. Gakpo has an impressive dribbling ability and ball control. He can sprint past the defense with ease and score with his impressive long shots. He's often seen sporting stylish black Puma Future boots during a match.

Cody Mathès Gakpo grew up in the city of Eindhoven, in a vibrant, bustling district called Stratum, famous for its sports centers and nightclubs. His birth date is May 7, 1999. Gakpo was raised by his Dutch mother and a father who immigrated from Togo. He has Ghanaian heritage.

Gakpo's parents sent him to the PSV Youth Academy when he was seven years old. All members of his family have a background in competitive team sports, namely, football and rugby.

Gakpo quickly matured as a football player and was commended for his skills and athleticism by coaches and football agents alike. He progressed through all tiers of youth football, starting out as a midfielder and gradually moving to his current position of a left-wing forward.

Gakpo started playing for the reserve Jong PSV team in the Dutch First Division in 2016. All goals he scored playing for Jong PSV helped him get a permanent place on the matchday squad of PSV Eindhoven.

After ten years of playing for the PSV youth team, Gakpo was offered a contract by the main club. Currently, he earns £10 million per year, and his contract is set to expire in 2026. Football experts consider Gakpo to be one of the hottest young players on the European football market.

He's often favorably compared to Antony Santos. Despite being paid less than his Brazilian counterpart, Gakpo is a more promising player with a bright future ahead. Big European clubs, including Chelsea, Manchester United and Liverpool, consider Gakpo one of their favorite "transfer targets."

Gakpo's career highlights include representing the Netherlands national team in 2021 and 2022 and winning the 2022 KNV Cup. His 2022 Qatar World Cup stats are also quite impressive, making him one of the top-3 strikers of the tournament.

Cody has been dating a gorgeous blonde Noa van der Bij since early 2022. She is a Dutch model and works as a junior booker for Cachet Models Agency.