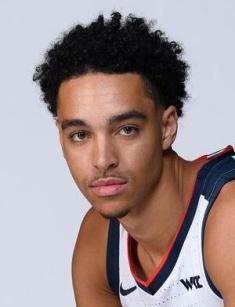 Andrew William Nembhard who was born on January 16, 2000 is a Canadian-born professional basketball player. After playing college basketball for the Florida Gators and Gonzaga Bulldogs, he became a point guard for the Indiana Pacers of the National Basketball Association (NBA).

The future NBA star was born in Aurora, Canada. He attended high school in Vaughan before relocating to Montverde, Florida, where he continued his secondary education in a private academy. Andrew's parents' names are Claude and Mary. His father is a former basketball player, who also worked as a coach. The player's younger brother, Ryan Nembhard, plays college basketball for the Creighton Bluejays.

Andrew started playing basketball in an introductory league when he was just three years old. His father's passion for the sport was an inspiration for him to rise to the ranks of basketball royalty. Claude also coached his son until he was in tenth grade.

After establishing himself as a promising basketball player at Montverde Academy, Andrew was committed to the University of Florida and joined its basketball team, Florida Gators. He declared for the 2019 NBA Draft, but eventually decided to stay in college.

Nembhard once again declared for the NBA Draft in the next year, but hired an NCAA-certified agent to keep his options open. He opted to continue playing college basketball, but transferred from Florida to the Gonzaga Bulldogs. During his first Gonzaga basketball season, Andrew's average stats per game were 9.2 points, 2.4 rebounds, and 4.4 assists. In April 2022, he decided to waive the remaining years of his college eligibility and entered the 2022 NFL draft.

Nembhard was picked by the Indiana Pacers during the second round of the 2022 NFL draft. The player and the team agreed on a four-year, 8.6-million-dollar contract. The deal included a guaranteed salary of 6.4 million dollars, which was a record number for a second-round selection out of college.

In December 2022, the point guard became the second player in NBA history with 30-plus points, 12-plus assists, 8-plus rebounds, 5-plus assists on at least 60 percent shooting from the field. These historic stats placed him in an exclusive club with Los Angeles Lakers star LeBron James, who was the first to achieve this record.

The basketball player is very private when it comes to his love life, so there is not much known about his relationship history. On his social media, Nembhard prefers sharing photos of memorable moments in his career as a basketball player.