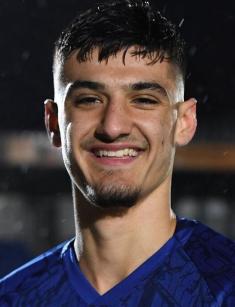 Armando Broja, who was born on September 10, 2001, is an English-born football player. Armando is best known as a Premier League player for the Chelsea club. There, he plays as a forward under the number 18.

Armando was born in Slough, a city located in England. By the way, he is the only son in the family. His mom is Blerina, while his dad's name is Xhevahir. Armando was raised in a middle-class family along with two sisters. He began playing football as a child because his father was a huge fan of the sport. His dad trained him; he even built a small football field in the yard so Armando could improve his skills. He preferred playing there instead of learning at school.

His football career began when Armando first started playing football with Burnham Juniors. Prior to signing with Tottenham Hotspur and joining their under-8 selection, he first participated in a couple of tryouts with Reading and Fulham. He spent two years at Tottenham before joining the Chelsea Academy in 2009.

Armando agreed to a two-year contract and signed his first professional contract with Chelsea in February 2020. He made his professional debut in a home victory in March. He scored his first-ever league goal on September 19 in a 2-0 victory over Sparta Rotterdam. Armando renewed his five-year deal with Chelsea on July 18, 2021. Armando and Chelsea agreed to a new, long-term deal in September 2022 that would last until 2028. In his sixth league outing of the year, he netted his first Chelsea goal.

Armando was contacted by Albania U19 about the friendly match against Kosovo U19 in May 2019. He was selected to start on June 3, 2019, in Albania's first friendly match against Kosovo, and he scored his team's third goal in a 3-1 road victory. Armando made his debut in a defeat to Lithuania at home in September 2020. He scored his first goal as a senior on September 5, 2021, against Hungary in a 2022 FIFA World Cup qualifying game.

Not much is known about Armando's personal life. It is known that, as of 2022, he is focused more on his football career than on a romantic relationship.

In 2022, Armando was injured in a friendly match in the middle of the season. Chelsea was competing in the Premier League in Abu Dhabi at the time, and Armando screamed in pain after colliding with a player. He stayed on the field for a few minutes before being removed.

Here is the list of achievements that Armando ever received during his sports career:

Armando didn't receive many important awards or achievements throughout his career (as of 2022). He is a young player, so it is not the end.