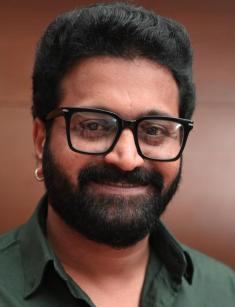 Rishab Shetty is an Indian actor and movie maker. He's a star of Kannada movies (it's one of the multiple languages in India).

Rishab was born on July 7, 1983 as Prashant Shetty. His birthplace was the Keradi village in Karnataka state.

He began to play in the theatre when he was at school. He got higher education in the field of movie direction.

Rishab's dad's name is Bhaskar, he's an astrologer. His mom's name is Lakshmi. The star has a sister named Pratibha and a brother named Praveen.

One of his closest friends is Rakshit Shetty. Many people believe Rishab and Rakshit are siblings — yet they're colleagues. The latter is an actor and movie producer too. Rashkit's wife, Rashmika Mandanna, is one of the most well-known actresses in South India. In 2022, Rishab was supposed to act in Rakshit's new movie called Bachelor Party but had to reject this offer because of the lack of time.

The future star began his career in the cinema industry in assistant positions. To earn his daily bread, he accepted various odd jobs, including in hotels and real estate.

In 2012, Rishab landed his debut major role in the Tuglak movie. In 7 years, he got his first role as a male lead in the Bell Bottom movie.

In 2016, he opened a production house and tried his hand at directing movies. His first attempt was called Ricky and it failed to become a massive hit. His second attempt, Kirik Party, took place the same year and turned out to be much more successful.

In 2022, the Kantara movie saw light. Rishab wrote and directed it. Plus, he had a role there. Kantara was a blast: it quickly landed on the second position in the rating of the highest-grossing Kannada films that have ever been created. It was translated into four other Indian languages and received nationwide critical acclaim.

In 2017, Rishab tied the knot with Pragathi Shetty. Their first conversation took place on Facebook. Rishab's future wife added him to friends and messaged him.

Rishab and Pragathi's love story was dramatic. Initially, her parents failed to approve of her engagement. They changed their minds when this gentleman established himself in the cinema industry and began to earn more money. Praghati used to be an IT professional but quit her job to devote herself to her spouse and kids.

There are two children in the family: a son named Ranvir and a daughter named Raadya.

These are the awards that Rishab won:

Besides, he was nominated for IIFA Utsavam.