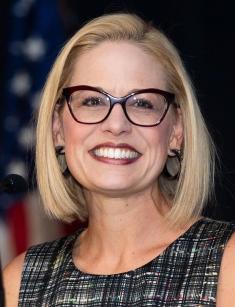 Kyrsten Sinema, who was born on July 12, 1976, is an American politician and former social worker. Kyrsten is known for serving as a senior US senator from Arizona. She quit the Democratic Party on December 9, 2022, and she then registered as an independent.

Kyrsten was born in Arizona; her hometown is Tucson. She comes from a well-established family that consists of her mom, Marilyn, and dad, Dan Sinema. She was not the only child in the family, so she grew up with one older brother and a younger sister. Kyrsten's parents split up when she was a child, so she started living with a stepfather in Florida. She attended Arizona State University after graduating from Walton County High School. Then she became a social worker.

She started in politics as a non-partisan Green Party supporter. She participated in Ralph Nader's 2000 presidential campaign as a volunteer for the Green Party. As an independent candidate supported by the Greens, Kirsten ran for the Arizona House of Representatives in 2002. With 8% of the vote, she finished in last place. Kirsten was elected to the state House of Representatives in 2004 after winning the Democratic Party's internal elections. She was then successfully re-elected three more times. She was elected to the Arizona Senate in 2010.

Kyrsten made her first attempt at running for office in 2002 as an independent ally with the Arizona Green Party. With 8% of the vote in a race with five candidates, she came in last place. She defeated the Republican candidate for the Arizona Senate in 2010, 63 percent to 37 percent.

Kyrsten said in June 2011 that she was thinking about running for the U.S. House of Representatives in 2012. 2014 saw her run for reelection, and she faced no opposition in the Democratic primary, which was held on August 26. Kyrsten won the general election in 2016 with 61 percent of the vote after facing no opposition in her primary. Republican nominee Dave Giles, who was her opponent, garnered 39% of the vote.

She formally declared her campaign on September 28, 2017, for the Class I United States Senate seat currently held by Republican incumbent Jeff Flake, who decided not to run for reelection the following month. On January 3, 2019, Sinema took the oath of office to serve in the U.S. Senate. Krysten announced that she had quit the Democratic Party and registered as an independent in December 2022.

Speaking of Kyrsten's political positions, they are quite multifaceted. She looks positively at the legalization of abortion and does not think that the death penalty should be practiced in America. In 2019, the politician even voted for an increase in taxes, and the excise tax was worked out. In 2021, Kyrsten opposed raising the minimum wage during the pandemic. Being bisexual, Kyrsten actively fights for LGBT rights.

Kyrsten is bisexual. By the way, she has no belief in God or any other religion. When she has free time, Kyrsten likes to do sports. She has also completed a lot of marathons, so it can be called her hobby. Kyrsten was married to Blake Dain. They married in 1995, and after four years of marriage, they divorced in 1999. She's currently single and has no children.

Throughout her career, Kyrsten, through her efforts, sought to promote various bills in an attempt to improve the quality of life for Americans. In particular, she voted against the reform to raise drug prices, supported initiatives to eliminate genocide in the world, and actively participated in tax reforms.