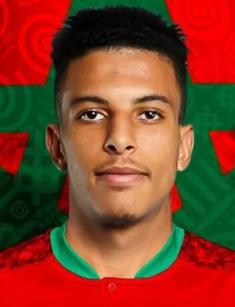 Azzedine Ounahi who was born on April 19, 2000 is a Moroccan professional football player. He is currently a midfielder for Ligue 1 club Angers. Ounahi also represents his homeland internationally as a part of the Morocco national team.

The midfielder was born and raised in Casablanca. There is little known about his childhood and teenage years, and Azzedine usually prefers to keep his family out of the spotlight. In December 2022, the player's mother met with King Mohammed VI to celebrate the achievements of the Morocco national team at the World Cup.

After playing at the Mohammed VI Football Academy in Sale, Morocco, Ounahi signed a pre-contract agreement with the French football club Strasbourg. Featured initially for reserves, the player was convinced he would secure a professional deal with the club after the pandemic was over. Unfortunately, Ounahi was only able to play for the club's second team. However, the midfielder was sure that he had what it took to be successful as a Ligue 1 player, and soon the new opportunity presented itself. In July 2021, he signed a four-year deal with French club Angers, where he was able to put his skills as a midfielder to the ultimate test and soon became one of the team's star players. Ounahi’s total career stats are 112 appearances and 9 goals.

In the 2021 African Cup of Nations, Ounahi made his debut for the Morocco national team as a professional player in a game against Ghana that was victorious for Morocco.

The midfielder gained fame internationally after playing for his country's national team in the 2022 FIFA World Cup in Qatar. Azzedine helped Morocco to become the first African country to reach the World Cup semi-finals. His impressive performance in the games against Spain and Portugal surprised many football managers and fans alike. It also put Ounahi on the radar of many legendary clubs, including Barcelona and Leicester, who were reportedly considering acquiring the player. Former Arsenal star player Ray Parlour also believes that the club should make a move for the talented Moroccan midfielder. So far, it's unclear if Ounahi will stay with his current team or will be transferred to another club.

Azzedine's main focus is football, so there is little known about his personal life. His former manager described him as a "quiet and reserved" person, who needs the right environment to blossom.

In December 2022, King Mohammed VI invited Azzedine to meet with him and his family, and awarded him a medal to honor his massive contribution to the Morocco national team's success at the World Cup.

In 2018, Ounahi won a bronze medal with the Morocco national under-20 football team at that year's Mediterranean Games.