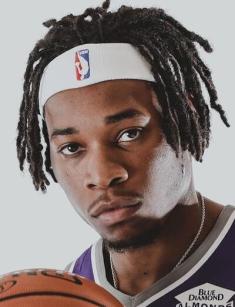 Richaun HoLmes, who was born on October 15, 1993, is an Illinois-born basketballer. He is best known for playing for the NBA's Sacramento Kings basketball team. Also, Richaun played for such teams as the Bowling Green Falcons and the Phoenix Suns. He was selected in the second round of the NBA Draft in 2015.

Richaun is from Lockport Township, Illinois. Little is known about his childhood and adolescence. His dad, whose name is Richard, served as a pastor in the local church. The future NBA player was also raised by his mom, Lynda. Richaun spent his entire childhood in Lockport, so he studied at the local high school. After successfully graduating from there, he attended Moraine Valley College in 2011, but after one year of education, he switched to Bowling Green.

Richaun Holmes debuted in the NBA in 2015. But his career as a basketballer started years before in high school and then continued in college. He was first selected by the Philadelphia 76ers.

Richaun was chosen by the Philadelphia 76ers as the thirty-seventh overall choice on June 25, 2015, in the second round of the NBA Draft. He participated in the NBA Summer League for three games before signing with the Philadelphia 76ers. Richaun Holmes scored 18 points against the Utah Jazz on December 28, 2015. The athlete scored 17 points on January 4, 2016, in a contest against the Minnesota Timberwolves. He scored 17 points against the Portland Trail Blazers on January 16, 2016. He was identified as having a left wrist radius fracture in October 2017. The Philadelphia 76ers exercised the option in 2018 and extended the contract for a fourth season.

Richaun Holmes was acquired by the Phoenix Suns in a trade on July 20, 2018, for a reward. The athlete reached the milestone of 10 points scored for the new team on November 6 in a game against the Brooklyn Nets. Richaun Holmes finished with 13 points and 10 rebounds. He boosted his season total to 19 points against the Los Angeles Clippers on December 10.

Richaun and the Sacramento Kings agreed to a multi-year contract on July 16, 2019. The athlete recorded a double-double on October 28, 2019, against the Denver Nuggets, scoring 24 points and grabbing 12 rebounds. Holmes scored 28 points and pulled down 10 rebounds on December 4 against the Portland Trail Blazers.

Richaun is a single man. His spouse was Alexis; they got married back in 2015 but then decided to divorce. Interestingly, they started dating years before their wedding. With his longtime partner, Richaun has a son. Richaun's net worth is considered to be about five million dollars.

Throughout his sports career, Richaun received the following accolades: