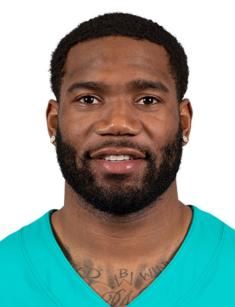 Xavien Howard, who was born on July 4, 1993, is a Texas-native footballer. He is better known for being a cornerback for the Miami Dolphins, a football team that picked him in the second round of the 2016 NFL draft under the number 38. Xavien is also known for playing college football at Baylor.

Xavien is from Houston, Texas. He studied at the high school, where he started playing football. In the local team, he was in the defensive back and quarterback positions. His family background, as well as his childhood, has still not been revealed. Interestingly, in high school, one of his football teammates was William Jackson III. In 2012, Xavien attended Baylor University, where he played college football until 2015. In 2016, he was drafted into the NFL.

Xavien was present at the Indianapolis, Indiana, NFL Scouting Combine in 2016. He finished tied for 12th among defensive backs in the short shuttle after completing all of the combined activities.

He was chosen by the Miami Dolphins in the second round of the 2016 NFL Draft (38th overall) to start his professional career. He agreed to a four-year, $6.12 million deal with the Americans in May 2016 that included a $2.65 million signing bonus and a $3.83 million guarantee. He then suffered a knee injury on the final day of the team's mini-camp, which led to his inclusion on the list of people who are physically unable to compete. He became the highest-paid cornerback in the league in May 2019 when the Dolphins extended his contract and offered him a five-year deal with a $76.5 million signing bonus and $46 million in guaranteed money. He was also added to the active/physically unable list by the team on July 28, 2020, the first day of training camp.

The football player and his fiancée, Keeli Long, got engaged. Together with his betrothed, he welcomed three children. But he gained notoriety when, in December 2019, he was taken into custody after a domestic violence incident involving Keeli. He also allegedly grabbed his companion and shoved her against a wall after they got into a verbal argument. Later, the event was litigated, but in February 2020, the state's attorney's office dismissed the case since his fiancée declined to file a complaint.

Here are the most essential Xavien highlights in his football career as a cornerback: