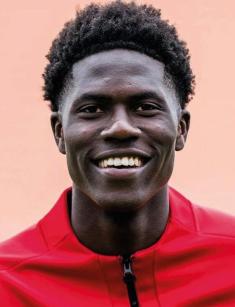 Amadou Ba Zeund Georges Mvom Onana, who was born on August 16, 2001, is a Belgian-native footballer. He is better known for being a defensive midfielder for the national team of Belgium and the Premier League's Everton football club.

Amadou was born in Senegal. The future footballer spent his childhood in a small Muslim village called Dakar. His mom is Senegalese, while Amadou's dad is from Cameroon. He has a sister, Melissa, but the names of other family members are still not known. Melissa often posts family photos with Amadou and other siblings on Instagram, and it seems that she is very close with her brother. The educational background of Amadou is still not known.

From the age of two to three, Amadou began practicing his football skills on the streets of Dakar, Senegal. As a football player's father who lived in Belgium and was a frequent visitor, Onana enrolled in the Anderlecht Brussels Academy when he was 11 years old. However, because Dakar remained Onan's permanent residence, he was unable to pursue a career at Anderlecht. He relocated to the RUS Brussels club in 2013 and then to Zulte Waregem two years later. Amado played basketball up until the age of 15, but afterward switched to football.

Amadou joined the German club Hoffenheim in the summer of 2017, where he initially played for the under-17 team before moving up to the under-19 level.

Amadou participated in the under-17, under-18, under-19, and under-21 Belgian national teams. He was called up to the Belgium senior team on May 18, 2022, for the Nations League games against Wales, Poland, and the Netherlands. He made his debut for the national team as a midfielder on June 3, 2022, against the Netherlands. Amadou was a part of the official Belgian national team roster for the 2022 World Cup matches in Qatar on November 10, 2022. On November 23, he made his World Cup debut against Team Canada in the opening round of the group stage. He entered the game as a halftime substitute.

Amadou's yearly salary is about 1.5 million euros. He is currently single and has never been officially involved in a romantic relationship. To be honest, nothing is known about his personal life. All the information available indicates that he lives in England and sometimes posts on Instagram. On this platform, he has 132k followers.

Throughout his career, Amadou has not received many awards, as he is still too young. However, here is a list of all the awards he has received.