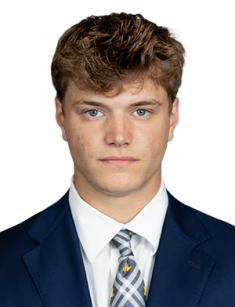 J.J. McCarthy is a promising American football player. He's a quarterback who plays for the Michigan Wolverines.

The future star was born on January 20, 2003, in La Grange Park, Illinois, as Jonathan James McCarthy. He grew up in his home state and received basic education there.

J.J.'s parents' names are Jim and Megan. The former runs a printing logistics management company. The latter used to be a competitive figure skater and now works as a senior project manager at a staffing agency.

J.J. has two sisters, Caitlin (elder) and Morgan (younger). Caitlin specialized in science and computers at the university.

Some people think that Mike McCarthy, another prominent footballer, is J.J.s brother. This isn't true: Mike was born in 1963 and isn't related to J.J.'s family.

As a kid, he was good not only at football but also at hockey and lacrosse. His mom taught him to skate at a young age. His dad, who used to play football and baseball, is a Blackhawk fan. Only in his senior years in high school, J.J. focused on American football.

In a 2019 interview, his dad confessed that J.J. was chubby when he was a preschool boy. He was obsessed with throwing balls. He would frequently break lamps and mirrors. He loved the adrenaline and was very dynamic. Fortunately, teachers found a way to make him concentrate on his studies.

In 2019, over thirty schools sent offers to this promising freshman. He opted for Michigan. Even though the brilliant start of his career was postponed because of the pandemic, he showcased impressive stats during the 2021 season.

The next year, J.J. competed with Cade McNamara for the position of starting quarterback. Ultimately, the coach chose J.J.

In 2022, this sportsman hit the news after getting a shoulder injury. He had to miss several games.

NFL draft analysts believe he's among the top potential stars of the 2023 season.

According to some sources, J.J.'s net worth in 2022 is less than $1 million. This fact has never been officially confirmed, so the real figure might be higher. The sportsman once said he decided to regularly give some part of his earnings to charity.

This guy is renowned for his arm strength. His authentic jersey number is 9.

J.J. has been dating Katya Kuropas since the Autumn of 2018. Their romantic relationship began when both were still in high school.

Katya is an extremely supportive girlfriend. She tries to visit all the games that her boyfriend takes part in. Judging by her looks, you might think she's an influencer but she prefers to stay away from the public eye.

This couple has never officially shared the plans for tying the knot. Probably, they're too young to start a family.

J.J. practices mindfulness and meditates twice per day. Whenever possible, he tries to meditate on the field before each game.