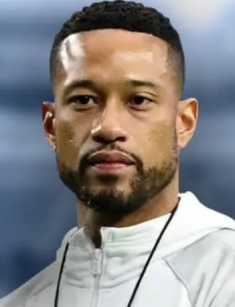 Marcus Freeman is a promising young football coach from the US. He has managed to improve the performance of several college level teams, especially their defensive abilities, before signing his first big-name contract. Currently he trains the Notre Dame Fighting Irish team. He used to be a linebacker at Ohio State back in the day.

Coach Freeman has attracted a fair share of criticism after starting the 2021 NFL season by losing 3 games in a row. The Fighting Irish finished ranked 19th (8 wins). Freeman has also led them to the 2022 Gator Bowl victory over the Gamecocks (SC). Freeman's coach salary is estimated at $5 million a year.

Marcus Freeman grew up in Huber Heights, OH. He is of Black American and Korean heritage. His birth date is January 10, 1986. Marcus and his brother Michael Jr. were raised by their father Michael Freeman, a US Air Force officer, and Chong Freeman.

Marcus was a very athletic kid growing up. Family supported his decision to join the school football team. Chong Freeman also made her kids take taekwondo lessons. Marcus is a practicing Catholic.

Freeman started attending OSU in 2004. He was signed up to play as a linebacker for his alma mater football team in 2006.

He represented Ohio State for 3 consecutive years. Marcus appeared in a total of 51 games, making it to the top-20 list of the most effective defenders in the university's history.

In 2009, Marcus had a brief stint in the NFL. He was drafted and then waived by the Chicago Bears before appearing in any games. He went on to join the Buffalo Bills for a month and then the Houston Texans before retiring in 2010 due to a heart condition.

Marcus went back to OSU to work as a Graduate Assistant before accepting coaching offers from other college football teams.

In 2011 he worked as an assistant coach for The Golden Flashes (Kent State University).

In 2013 Marcus worked as a co-defensive coordinator for The Boilermakers (Purdue University). Freeman has managed to greatly improve the team's defense and turn it into a force to contend with.

In 2017 Marcus worked as a defensive coordinator for The Bearcats (the University of Cincinnati). Marcus has made headlines after turning the Bearcats' linebackers into the best defense squad in the AAC.

In 2021 Marcus worked as a head coach for The Fighting Irish (the University of Notre Dame). The NFL legend Brian Kelly has chosen Marcus to be his successor. While Freeman started the season with three consecutive losses, he managed to improve the team's performance, finishing in 19th place and winning the Gator Bowl.

While attending the postgame press conference after the 2022 Gator Bowl, Freeman praised the team's performance and compared captain JD Bertrand's performance to the likes of Aj Hawk.

Marcus Freeman has recently appeared on Chris Zorich's popular NFL podcast talking about his plans for future seasons and the decision made by Drew Pyne, one of the top ND players to become a free agent.

Marcus Freeman is a happily married man. His wife’s name is Joanna Herncane. They are parents of 6 children: Vinny, Siena, Gino, Nico, Capri and Rocco.