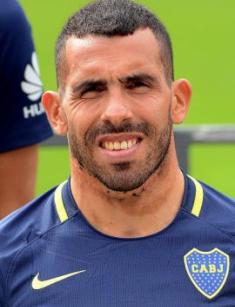 Carlos Alberto Tevez (Martinez), who was born on February 5, 1984, is an Argentinian former footballer. Now, he serves as a manager for Rosario Central. Carlos is also known for playing for such football teams as Boca Juniors, All Boys, and West Ham United.

Carlos was born in the capital of Argentina into a low-income family that also had four other children. He was raised in one of Buenos Aires' most impoverished and criminally active neighborhoods. Juan Cabral and Fabiana Martinez were Carlos' natural parents. The child footballer's aunt Adriana Noemi Martinez and her husband Segundo Raimundo Tevez later adopted him. By the way, amid a dispute between his youth club and Boca Juniors, his adopted parents changed his last name to that of his adoptive father.

In a press conference, Tevez claimed that football spared him from a miserable existence because he played with a group of neighborhood lads who were unconcerned with the outside world. Although the practice was held in a defunct landfill, the youthful players were optimistic about the future. Thankfully, the difficult days came to an end when Tevez enrolled in sports school and joined the All Boys youth squad's main team. The man picked up the fundamentals of football and developed the essential playing abilities under the direction of qualified coaches.

At the age of 16, Carlos signed a professional contract with Boca Juniors. On October 21, 2001, he took the field for the first time during a game against Talleres. Carlos was successful while playing for the Argentine team. He won the Intercontinental Cup (2004), Copa South America (2004), Copa Libertadores (2003), and the Argentine Championship (2003). In addition, Argentine journalists named him the best sportsman and football player of the year in 2004.

On March 4, 2007, against Tottenham Hotspur, Carlos scored his first goal for West Ham thanks to an excellent free kick. Carlos accepted the conditions of his two-year loan agreement with Manchester United after ending his West Ham contract. He then signed a new contract on August 10, 2007.

Shortly after declaring his retirement from playing, Carlos was named head coach of Rosario Central of Argentina's Primera División on June 21, 2022. Carlos left his position as manager of the team after the conclusion of the 2022 Argentine Primera División season after only five months, citing the approaching club director elections.

Carlos is a married man. In his native Argentina, on December 22, 2016, Carlos married Vanesa Mansilla. Together, they have two children: daughters Florencia and Katia. Also in 2010, he dated Brenda Asnicar for about a year.

Here are the most essential awards that Carlos got from his career: