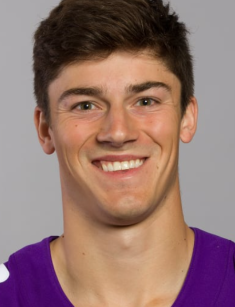 Riley Patterson who was born on September 7, 1999 is an American professional football player. He is currently a placekicker for the Jacksonville Jaguars of the National Football League (NFL). Riley played college football for the Memphis Tigers football team.

The rising NFL star was born and raised in Edwardsville, Illinois, where he attended a local high school. His parents' names are Kevin and Tracy. Riley also has a sister named Maddi. The player's family is very supportive of his career and often attends his games.

In high school, Patterson played both football and soccer, but was more passionate about the latter. He didn't plan to become a football player, and often missed practice to play soccer instead. However, by the end of his high school journey, Riley realized he had more potential as a football player. He was ranked as a three-star recruit and committed to the University of Memphis. From 2017 to 2020, Patterson made 41 appearances for the Tigers.

In May of 2021, the placekicker was signed as a rookie free agent by the Minnesota Vikings. The team historically struggled with players of this position, and Greg Joseph was the only kicker on their roster prior to them signing Patterson.

After being injured four months later, Riley was placed on reserve and released at the end of August.

On 19 October 2021, Patterson and another placekicker, Brett Maher, were signed to the New England Patriots' practice squad.

On 16 November, Patterson was signed to the Detroit Lions practice squad. He made his professional debut in the game against the Vikings. The kicker was waived in August 2022.

After being waived by the Lions, Patterson was signed by the Jacksonville Jaguars, whose coach found him a promising player. His one-year NFL contract with the Lions was worth 660 thousand dollars and didn't include a signing bonus. On 14 January 2023, Riley's goal helped his team to win the game against the Chargers.

On April 15, 2023, Patterson married his high school girlfriend, Claire. He and his wife were together for seven years before tying the knot.

The placekicker is Christian, and his religion means a lot to him. In a 2020 interview, he admitted that football is not the most important thing in his life and he feels like he has a bigger purpose than just being a football player. On January 14, 2023, he was photographed holding up his cross necklace after his team defeated the Los Angeles Chargers.

In 2019, the placekicker was named to First Team All-Conference. He was also listed on Lou Groza Award Watch List for two consecutive years.

In 2022, Patterson was named #10 placekicker of the year by the Fantasy Pros website. He ranked above such players as Brandon McManus, Cade York, Dustin Hopkins and Jake Elliott.