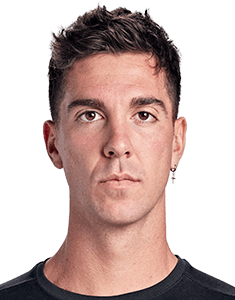 Thanasi Kokkinakis whose real name is Athanasios is a professional tennis player from Australia.

Thanasi was born on April 10, 1996 in Adelaide, South Australia in the family of Greek immigrants Trevor (Tryfon) and Tripoli (Greece). Thanasi attended Scotch College He began playing tennis at a young age and quickly showed promise as a talented player. He trained at the South Australian Academy of Tennis and represented Australia in junior competitions. In 2012, he reached the quarterfinals of the Australian Open boys' singles tournament.

Thanasi began his professional career in 2013 at the age of 17, and quickly made a name for himself on the ATP Tour. He reached a career-high ATP singles ranking of No. 69 in April 2015. In 2016, an injury to his left shoulder kept him out of action for several months. He returned to the ATP Tour in 2017, but struggled to regain his form and suffered several more injuries.

Despite injuries and setbacks, Kokkinakis has remained determined to continue his professional career. He has worked hard to recover and improve his game, and has shown glimpses of his potential on the ATP Tour. He continues to be a respected and talented player on the tour and will look to continue climbing back to the top of the rankings.

He has not publicly discussed his personal life in great detail, and therefore not much is known about it. He has said in interviews that he is dedicated to his training and competition schedule, and that he does not have much time for other activities outside of tennis. He has been open about the challenges of dealing with injuries and the mental and physical demands of competing at the highest level. Kokkinakis has also been open about his struggles with injuries, specifically his shoulder injury which kept him out of the tour for a long period of time and the comeback process. He has a close relationship with his family, and they often travel to support him in his tournaments. He is also active on social media, where he posts about his training, matches, and travels.

As of 2023, Thanasi is still single and not married.