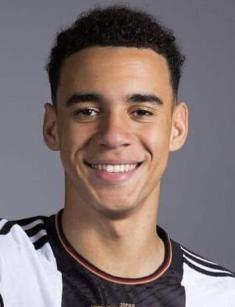 Jamal Musiala is a young professional football player who is currently playing as an attacking midfielder winger for Bayern Munich and the Germany national team.

Jamal Musiala is considered one of the most promising young talents in football and has a bright future ahead of him. He has the potential to become one of the best players in the world. He's a player with a lot of talent and skill, and his performances on the field are always impressive. He's a hard worker and has a great attitude, which makes him a valuable asset to any team. He is someone to watch out for in the future as he continues to grow and develop as a player.

He was born on February 26, 2003 in Stuttgart, Germany and began his football career at a very young age. He joined the Chelsea academy at the age of 7 and quickly established himself as one of the most promising young talents in the academy. He was known for his technical ability, speed, and skill on the ball.

In 2017, at the age of 14, he joined the Bayern Munich academy and quickly made a name for himself with his performances for the youth teams. In 2019, Musiala made the decision to leave Chelsea and join Bayern Munich. He joined the club's youth academy and quickly established himself as one of the best players in the team. After impressing in the youth ranks, he made his professional debut for Bayern Munich in 2020, at the age of 17, becoming the youngest player to ever play for the club in the Bundesligaю

In his first full season with Bayern, Musiala established himself as a regular starter, scoring important goals in both the league and Champions League. His performances earned him praise from coaches and teammates, as well as a call-up to the German national team. He made his debut for Germany in 2021, becoming the youngest player to ever represent the country.

Musiala has been compared to some of the best attacking midfielders in the world due to his technical skill, vision, and ability to score goals. He is known for his quick and precise passing, as well as his ability to take on and beat defenders one-on-one. His ability to play in tight spaces, quick thinking and ability to score goals make him a valuable asset to Bayern Munich. He is also a great team player and has good vision, which allows him to create scoring opportunities for his teammates.

Despite his young age, Musiala has already become one of the most exciting prospects in German and European football. He has already won numerous individual and team awards, including the best young player award in the Bundesliga. He is expected to have a bright future in the sport, with many experts predicting that he will become one of the best players in the world in the coming years.

Musiala is a versatile player who can play as a central attacking midfielder, as a winger or as a forward. He's known for his ability to take on players, his vision and his ability to score goals. He's also a hard worker and is willing to press and defend. He has a very good tactical understanding of the game, which allows him to play in different positions.

Not much is publicly known about Jamal Musiala's personal life. As a young professional football player, he is still in the early stages of his career and is likely focused on developing his skills and building his reputation in the sport. He is known to keep a low profile and has not shared much information about his personal life in the media. He is known to have a good relationship with his family and close friends, and is said to be a hard-working and dedicated player who is committed to his craft. He is still young and has a lot of time to grow and develop as a person and athlete.

Jamal Musiala is still in the early stages of his career and is expected to win many more awards and honors in the future.Here are some of the notable honors and achievements he has earned: