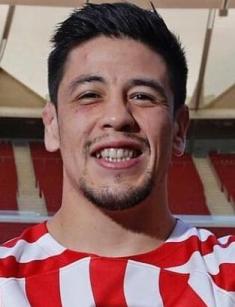 Brandon Moreno is a professional mixed martial artist and kickboxer from Tijuana, Mexico who currently competes in the flyweight division of the Ultimate Fighting Championship (UFC). Moreno began his martial arts career as a kickboxer, competing in various regional promotions in Mexico before transitioning to MMA in 2014. He quickly made a name for himself on the Mexican circuit, winning multiple regional titles and earning a reputation as a skilled striker and submission artist.

Brandon Moreno was born on December 7,1993 in Tijuana, Mexico. He grew up in a working-class family with a piñata business and from an early age, he was exposed to the sport of boxing. Moreno began training in boxing at the age of 14 and quickly fell in love with the sport. He trained and competed in boxing for several years before transitioning to mixed martial arts (MMA).

Brandon Moreno began his professional mixed martial arts (MMA) career in 2012 and quickly established himself as a top prospect in the regional MMA scene in Mexico. He fought primarily for Lucha Libre MMA and won several championships and built a record of 11-3. Moreno is known for his well-rounded skillset, with solid striking and grappling abilities, as well as his toughness and heart.

In 2016, Moreno was signed by the Ultimate Fighting Championship (UFC) and made his debut with the organization later that year. He quickly made a name for himself in the flyweight division and has notable wins over fighters such as Louis Smolka, Ryan Benoit, and Jussier Formiga. Moreno is considered one of the top fighters in the flyweight division and has put on some exciting fights in the UFC.

In 2021, Moreno fought for the Flyweight title against Deiveson Figueiredo and the fight was considered one of the best fights of the year. Moreno lost the fight but put on a great show and gained a lot of respect from the fans and critics. He was also the first fighter to take Figueiredo to the judges decision in the UFC.

Moreno continues to compete in the UFC's flyweight division, and his career is still on the rise, with many exciting fights and potential title shots to come.

In addition to his fighting career, Moreno is also a dedicated family man. He is married and has three daughters. Moreno is also known for his charitable work, frequently giving back to his community and using his platform to raise awareness for various causes.

Overall, Brandon Moreno is a highly talented and respected mixed martial artist, who has worked hard to make a name for himself in the sport. He is a fan favorite and has a great reputation. Moreno is also a dedicated family man and a philanthropist.

Here is a list of some notable accomplishments of Brandon Moreno in his professional mixed martial arts career: