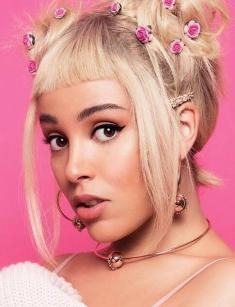 Doja Cat is an American singer, rapper, and songwriter who is known for her unique blend of music, which combines elements of hip-hop, R&B, and electronic dance music.

Doja Cat, whose real name is Amala Ratna Zandile Dlamini, was born on October 21, 1995, in Los Angeles, California. She grew up in a musical family and began playing the piano at a young age. Her mother Deborah Sawyer, a professional painter and visual artist, exposed her to a wide range of music and art, which influenced her creative development. Her father Dumisani Dlamini performs Zulu descent.

As a child and teenager, Doja Cat was very interested in music and began writing and recording her own songs. She was part of a school choir and performed in various local shows and competitions. She also performed in a theater group, where she got a taste of the stage and the performing arts.

Doja Cat began posting her music on platforms like SoundCloud and YouTube as a teenager, and quickly gained a following for her unique blend of music, which united various elements of hip-hop, R&B, and electronic dance music. She was known for her unique style and ability to blend various genres of music together in her songs.

In 2014, Doja Cat released her debut EP "Purrr!" under the name of Doja Cat. The EP was well-received and helped establish her as a rising artist in the music industry.

In 2018, Doja Cat's breakout moment came with the release of her single "Mooo!", which went viral on social media and sparked widespread interest in her music. The song's accompanying music video, which featured Doja Cat dancing in cow-inspired clothing and makeup, earned millions of views on YouTube and helped establish her as a distinctive and playful artist.

After the success of "Mooo!", she released her debut studio album, "Amala," in 2018. The album featured a mix of hip-hop and R&B tracks, and received positive reviews from critics.

In 2020, Doja Cat released her second studio album, "Hot Pink." The album featured a more polished and mainstream-friendly sound and spawned several hit singles, including "Say So," which hit number one on the Billboard Hot 100 chart in the United States. The album received positive reviews from critics and was successful commercially.

Throughout her music career, Doja Cat has been praised for her unique style and bold fashion sense. She has also been recognized for her ability to create viral moments and her distinctive image and music videos.

Doja Cat has not publicly disclosed any information about her romantic relationships, however it’s known that she was in a short open relationship with American musician Jawny in 2019.

Doja Cat is a private person and keeps much of her personal life out of the public eye. Though she has been open about her struggles with anxiety and depression, and she has spoken about how her music has helped her cope with these issues.

She is also active in her community, she has spoken out against police brutality and racism and has been a vocal advocate for social justice.

She has a close relationship with her family and often shares pictures of them on her social media accounts.

Doja Cat's discography includes several EPs and albums, and some of them have been well received by critics and were successful commercially.