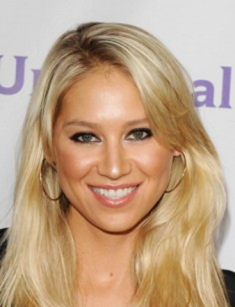 Anna Sergeevna Kournikova is a fashion model, a famous Russian tennis player, who holds the title of the first racket of the world in doubles. Anna is the youngest participant of the Olympic Games in the history of Russia.

Anna Kournikova was born in Moscow on June 7, 1981. The whole family of Anna was athletic - her father was wrestler, her mother was a tennis coach.

Anna Kournikova started to play tennis at age 5, and at 10 she got a scholarship from the famous Bollettieri Tennis Academy in Florida, USA.

In 1995 she wins the tournament "Orange Bowl" and several European championships.

These victories allowed the young athlete to take the first place in the ranking of juniors by the end of the year, which made her a professional tennis player. The same year, Kournikova won the Fed Cup, playing for the Russian national team (being the youngest participant).

In 1996 she took part in the Olympic Games in Atlanta, playing for the Russian national team. In 1997, Kournikova was in the semi-final of Wimbledon, in 1998 - entered the top twenty of the world's tennis players, defeating Steffi Graf, Martina Hingis and Lindsey Davenport.

Despite the successful games in doubles and a huge popularity, in singles Kournikova could only rise to the 8th line of the rating in 2000. There were no big victories in singles. There is an interesting fact - poker players have given her name a combination of AK (ace and king). According to their logic, this pair looks presentable, but wins infrequently.

In 2001 and 2003 was injured and left professional sports. From this moment Anna Kournikova begins to actively develop a modeling career. She takes part in video shooting, films, various shows and photo sessions. Anna participated in the shootings for Adidas, Berlei, Omega, Lycos, Wrangler, Rolex, Yonex. Kournikova played the girl at the reception in the motel in the movie " Me, Myself & Irene". Also, she takes part in charity tennis tournaments.

In 1998-2003, she was on the list of the 50 most beautiful people in the world according to People magazine, in 2002, according to the magazine FHM, she became the sexiest woman on the planet. In 2010, US authorities granted Kurnikova the citizenship of the country, which, as she said, became a "logical step", because she always felt both Russian and American.

Despite the end of her career, Anna has a magnificent body without attending expensive gyms. In numerous videos, Kournikova gives fitness advice on how to do sports without leaving home. She is sure: it is enough to have comfortable running shoes and clothes to do fitness, there is absolutely no need in training equipment. Anna Kournikova’s workouts have a great success among women from all over the world.

Anna Kournikova has never told the press the details of her personal life. It is known that she had relations with Russian hockey players Sergei Fedorov and Pavel Bure. According to Fedorov, they were married for 2 years, but Anna denies this fact.

In 2002, Anna was invited to star in the video of singer Enrique Iglesias "Escape". It was the beginning of the couple's relationship, which lasts until now. From time to time in the press there are rumors about the imminent wedding of Iglesias and Kournikova. There are discussions of random photos of the wedding ring or unsuccessful pictures, on the basis of which the press makes conclusions about the pregnancy of the star.

Moreover, there was rumor that Anna Kurnikova gave birth to their daughter. Like other "hot news" of the family of Anna and Enrique, the information about the birth of a child was fake.

Anna jokes, saying that such rumors appear every year, but she is not ready to become a mother and does not want to hurry. And in one of the interviews the young woman confessed that in the next 10 years she was not going to have children. But after the age of 45 she will think about it.

The couple claims that they are happy together without official marriage, although Enrique tells that Anna is the love of his entire life. However, there is also a version that the couple hides the wedding (or their intentions) because of the singer's career.

4 years ago Kournikova and Iglesias moved to a new house on the coast of Miami. In Kournikova’s Instagram you can see photo of a happy life and a lot of photos of theit two dogs. Anna likes diving, yoga, and together with Enrique they often make boat trips on a yacht. They equipped their own pier near the house. 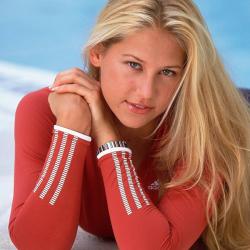