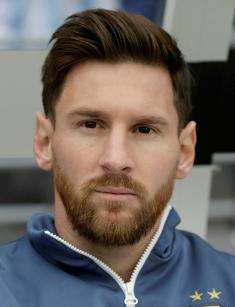 Lionel Messi is one of the greatest players in modern football. His tenacity, as well as the unique ability to overcome any defensive redoubts of rivals will forever remain in the memory of fans of the game of millions.

The future footballer was born on June 24, 1987 in Rosario, Argentine. He grew up in a large family and has two elder brothers, Matias and Rodrigo, and a sister Maria Sol. Jorge Horacio, Lionel's father, worked at a local steel plant, but in his spare time he coached a youth football team, and his mother Celia Maria worked in the service sector.

However, despite such a large family, Lionel’s grandmother was responsible for the education of a young talent. When Lionel was five years old, she insisted on his joining "Grandoli" club, and convinced the whole family that the boy will become a real football player. She said that the child has great skills that other children do not have. In future, Lionel did not forget the support of his beloved grandmother Celia, devoting all scored goals to her.

At school, Lionel was a diligent pupil, but most of the time he devoted his time to sport. At the age of eight, the young football player was already playing for the local professional club Newells Old Boys, which gave many famous football stars to the world. As a member of the youth team, Messi received his first sports award - the Friendship Cup of Peru. The boy was very promising player and Argentinean club "River Plate" was very interested in him as a footballer, but the guy did not join this team.

At the age of 11, Lionel was diagnosed an extremely unpleasant disease - growth hormone deficiency. The disease affected the growth of the guy; he had low height compared to other children. The treatment was expensive, the family spent about 900 dollars per month on hormone injections. That is why “River Plate” refused to purchase a promising footballer.

But this fact did not stop the world famous football club "Barcelona", and they persuaded Messi's father to send the boy to Spain for casting. Thus, the 13-year-old footballer went to Barcelona with little hope. Charly Rexach, the Catalan club sporting director, was delighted with Lionel’s first training and not only agreed to take him under the wing of the football team, but also fully paid for the boy's treatment.

In 2000 Messi moved to Spain and started playing in the youth team of the Catalan "Barcelona". In his first match, Lionel made poker, scoring 4 goals, and during the next thirty games he managed to score 37 goals.

He impressed not only the owners of the Spanish team, but also the coach of the Italian club "Juventus". The management of the "Old Lady" (nickname FC "Juventus") even offered to “lend” the guy for one season, but the young athlete put on a T-shirt of FC Barcelona.

Lionel Messi continued to play for Barcelona and three years later made his debut in professional football in a friendly match against the Portuguese club Porto. Journalists noticed Messi and predicted him a great sporting future. In 2004, the Argentinean played his first official match for FC Barcelona. The Catalans played against their compatriots from Espanyol, but the forward failed to score goals.

A year later Messi scored his first goal at the gates of Albacete, and became the youngest player in the history of the Catalan club, who managed to hit the opponent's gate in the main Spanish championship. At that time, the football player was almost 18 years old. Later this record was broken by striker Bojan Krkic in 2007.

Messi's career in Barcelona got better and better. Almost every year the footballer received personal awards, becoming the best player, the author of the best goal and the owner of other prestigious titles.

In the 2006/07 season, Messi begins to show phenomenal results. At the end of the season, the striker was nominated for several prestigious awards. But the best performance the athlete will show in 2012, when he will hit the gates of his opponents for 50 times. In the 2011/2012 season, the foward achieved double in the match against Betis and scored his 86th goal in 66 games, breaking 40 years record of German striker Gerd Müller.

The period from 2010 to 2012 is considered the best in Lionel Messi's career, as he becomes the world's second player who received four Golden Balls. The achievements of Messi are truly impressive, and the directors even thought about making a new film about the player. In 2014 films about the famous footballer were shot in Spain. Also the film "Messi" was announced, where his best goals are presented, as well as a story of his success.

In 2014, "Barcelona" signed a new contract with the famous forward, according to which he will earn 20 million euros a year after taxes, the cooperation will last until 2018.

In the team, Messi did not show impressive results. The footballer didn’t win any title.

As part of the Argentine team, Messi played at the 2008 Summer Olympic Games in China. He won the tournament, becoming the Olympic champion.

At the World Championship in 2010 the national team played in the quarterfinal, where the Germans defeated the Argentineans with a score of 0: 4. Messi was on the verge of getting the most important football trophy on the planet.

In 2016, in the final of the America's Cup, which was held in the US, the team lost in a penalty shootout with Chile - 2: 4, and Messi failed to hit the ball from the penalty spot. After the match, he said that he finished his career in the national team. Footballer explained to the media that playing for "white and blue" (the nickname of the national team of Argentina) are extremely unsuccessful for him, and he cannot win any significant tournament with his team.

Lionel Messi or Cristiano Ronaldo: who is better? The debate over who is better continues to be argued. It is difficult to decide the obvious winner in this confrontation.

The starting point of the unspoken confrontation between the players is called 2010. Then the unspoken competition began between the Argentine and the Portuguese. Messi has already won a prestigious trophy 4 times. It would seem that the footballer of "Barcelona" with his perseverance will achieve his goals, leaving the Portuguese behind him, because in recent years, the Argentine has always won the famous vis-a-vis.

Nevertheless, for Ronaldo, the 2015/2016 season turned out to be very successful. He was on the covers of the best sports magazines in the world. The Portuguese won two major continental trophies and received the Golden Ball in 2016.

Many people call such confrontation far-fetched, but still fans continue to create the image of the struggle between football superstars. They follow Messi and Ronaldo Instagram accounts, as well as other social media.

Their confrontation was characterized by the former defender of Manchester United Rio Ferdinand after the final match of the Champions League in the 2008/09 season:

"If they accuse me of not being able to fight against Messi, try to take the ball from him. Messi is a genius. This is his best characteristic. He acts like an artist".

This opinion is confirmed by f the great football players of the past. Legendary Diego Maradona called Messi his successor:

"I saw a player who will inherit my place in Argentine football. Messi is a genius, and he can become an even stronger player. His potential is unlimited, and I think he has everything to become the greatest player not only in Argentina. "

In 2016 the court of the capital of Catalonia announced a verdict on tax evasion case of the Argentine football player. Lionel Messi was ordered to pay a significant fine, and his father, who was a representative of the football player, was sentenced to 21 months in prison. The forward was fined two million euros, and Jorge Messi for a half million euros.

The court considered all the information that was provided by the prosecutor's office in this case. Themis recognized Lionel and his father as guilty of three episodes of tax evasion. Under Spanish law, if the period of violation does not exceed two years, a person may receive a conditional sentence.

According to the investigation, after the first charges, Lionel and Jorge Messi created an offshore Panamanian company with the help of lawyers from Uruguay and continued to hide information about incomes. The charges against Lionel were dropped for his participation in charitable friendly matches in 2012 and 2013. The prosecutor's office of Barcelona believes that the father of the football player who managed the finances should be found guilty. Many people assumed that the father took the whole responsibility in order not to break the career of his son.

The beginning of 2017 was not very successful for the Argentine, because in the Champions League the French "PSG" defeated Catalan "Barcelona" in the first match of the 1/8 final with a score 0: 4. It was a real catastrophe for Messi. There was information in the Spanish media that the football player advises the coach to get rid of some players who, in his opinion, cannot "reveal themselves."

Messi is not only a great football player. "Leo" (the nickname of Lionel Messi) is actively involved in charity. Lionel did not forget FC "Barcelona" helped him when he was as a child, and now he regularly helps disadvantaged children. In 2007, he founded a charitable fund, which supports access to health care, education, and sport for sick and poor children of Argentina. In 2010, his fund donated one hundred thousand euros for an educational program in Mexico with the support of UNICEF.

In 2012, the fund paid for the treatment of young Walid Kashash, who also suffered from growth hormone deficiency. In 2013, Messi donated 600 thousand euros for the reconstruction of a hospital for children in his hometown.

The first official girlfriend of the famous football player was the Argentinean Macarena Lemos, with whom Lionel had relationship when he was 19. The girl's father introduced Macarena to Lionel, but their relations did not last long. Messi with spent a lot of time on a football field, and the girl’s parents considered that their daughter deserves better man.

In 2006, Messi started a romance with model and "Playboy" star Luisiana Salazar. But their relationship did not last long.

Lionel’s old friend Antonella Rokuzzo made the footballer happy. She became his wife. Footballer met this charming girl in his childhood, they lived in the same city, and Messi often played football with her brothers. In 2009, the famous football player confirmed their romance in an interview. He said that he has a girlfriend with whom he is very happy. At the same time, the couple was seen at the Carnival in Sitegez.

On November 2, 2012, their son Thiago was born. And in April 2015, the famous football player confirmed that their family will have another baby.

At the end of 2012 sports magazine "Ole" published a photo session of the Argentinean model Claudia Chiardone, which she devoted to her favorite football player Lionel Messi. The forward of "Barcelona" did not react to this statement, and his girlfriend Antonella told that she did not see anything special in this photo session.

On June 30, 2017 Lionel Messi married Antonella Rokuzzo. Their wedding was held in Rosario. The event was magnificent and luxurious – Increased security measureswere taken to guard the celebration. The wedding was attended by 250 guests, including world football stars and other celebrities. In October 2017, the couple reported that they were expecting a baby. 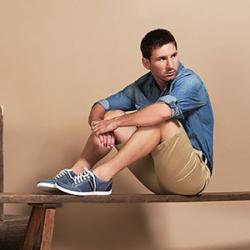