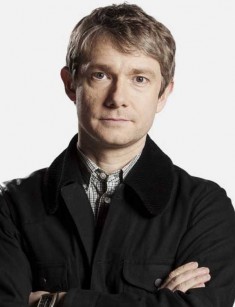 Martin Freeman is the British actor who is also involved in Hollywood projects. The role of Doctor Watson in the modern adaptation of the Sherlock Holmes plot in the series “Sherlock” by BBC was the breakthrough in his career. After that, the globally known actor started receiving offers to star in blockbusters both in his homeland and the USA.

Martin Freeman took the leading part of the hobbit Bilbo Baggins in the movie series “The Hobbit” which is the screen version of the fantasy novel by John Ronald Reuel Tolkien under the same title and the prequel of the trilogy “The Lord of the Rings.” Besides, the actor joined the famous movie universe Marvel. Martin Freeman got the secondary, yet ambiguous and interesting role of the government agent.

Martin Freeman grew up in a large family. His childhood cannot be called happy, but Martin’s character was strong enough to make his dream come true and become famous.

He was born on September 8, 1971, in a small town of the county Hampshire. The fifth child in the family, he grew up among noise, clamor, and his parents’ arguments. When the boy was little, his mother and father broke up. As per their mutual decision, Martin remained with his father. When Freeman was younger than 10, the father died of a heart attack. The boy returned to his mother, went to a Catholic school, and dreamed of the theater stage.

He was talented – at 15, Martin Freeman successfully took part in the youth theater performances. He was learning the world of the theater and falling in love with it more and more. By the time he finished school, the young man knew he was going to enter the theater institute.

He had chosen Royal Central School of Speech & Drama, one of the most prestigious English theater institutes, and his dream did come true – he became a professional actor with a diploma, but the road to the audience’s love was long.

Nature endowed Martin Freeman with the plain appearance. Couple with his small stature, the picture was hopeless. Movie directors did not see him as the Superman or Casanova.

He began to take part in movies in 1997, but these were minor episodes. In 2000, nobody knew Martin Freeman. At that period, he was put in the role in the sitcom “Black Books.” He was noticed, and more offers followed. He appeared in the sitcom “The Office” and the historical drama “Charles II: The Power & the Passion” and took part in other projects.

In 2005, Martin Freeman played the first major role in his career – it was the movie “The Hitchhiker's Guide to the Galaxy” which the audience welcomed warmly. Later on, he appeared in the movies “Dedication,” “The All Together,” “Nativity!” and others.

However, it was “Sherlock” that made the actor famous. It is the modern adaptation of the popular detective stories by Sir Arthur Conan Doyle in which Freeman played Doctor Watson. The movie is set in the modern London, and Doctor Watson has a popular blog about the adventures of his neighbor Sherlock Holmes.

Freeman was 40 when he received this role. The actor contributed something new in the image by reshaping him from a passive viewer to the active assistant of Sherlock Holmes (Benedict Cumberbatch).

In addition to the original interpretation of the literary material, the series was also notable for its format. The seasons consisting of only three episodes appeared every two years – yet each episode was a full-length movie. The first season was out in 2010. Since that moment, Martin has begun to be given offers in commercially successful projects.

Martin Freeman played Bilbo Baggins in “The Hobbit: An Unexpected Journey.” It is peculiar that Bilbo Baggins is also a writer and narrator, just like Doctor Watson. Besides, the actor’s height is 169 cm which was also important during the auditions because, according to the original book, hobbits were quite short.

The actor for the leading role was being selected for a long time, and there was nobody better than Martin Freeman. The work was planned for the time when the actor was still busy with “Sherlock.” For the actor, the director shifted the schedule for three months.

The second season of “Sherlock” came out in January 2012. As it was broadcasted, the actor was in the middle of working on “The Hobbit.” In 2013, Martin Freeman also played this role in the second part of the trilogy “The Hobbit: The Desolation of Smaug.”

The role of Doctor Watson gave Freeman the prestigious BAFTA award, and his participation in “The Hobbit” reinforced his popularity.

In 2014, the actor appeared in the last part “The Hobbit: The Battle of the Five ArmiesЭ and got the leading role in the drama “Fargo.”

Besides, in 2014, the actor came back to the role of Doctor Watson. In the third season, the actor’s common-law wife Amanda Abbington joined the movie crew and played Mary. The season finished on the disturbing and intriguing note which provoked a flaw of fans’ comments.

Still, the movie crew took its time to work on the series. It ranked high and was popular among fans, but the further activities were constantly being postponed. As the series creators complained in their interviews, both leading actors – Martin Freeman and Benedict Cumberbatch – became in-demand Hollywood actors, so that making the further episodes was challenging since the actors had no time. The fourth season was out only in 2017.

In his daily routine, the actor is unpretentious: he prefers simple food and does not eat meat – he’s vegetarian. Martin Freeman does not display his personal life. Some popular Instagram accounts are managed, but these are all fan pages.

For a long time, Martin Freeman was happy in his marriage. He met his partner, the actress Amanda Abbington, when he was 30.

In his interviews, the actor was saying that he considered that day to be the best in his life because it was the blessing of the fate. Unfortunately, even such happy and harmonious relationships sometimes end.

Martin and Amanda met in 2000 at the movie set for “Men Only.” They liked each other and started dating; after that, they decided to live together. In 2005, their first child Joe was born; in four years, a pretty girl Grace was born. Martin turned out to be a caring husband and father.

Martin and Amanda were not married legally because they believed it was not the most important thing in life. The spouses often worked in the same projects: they appeared in the movies “Swinging with the Finkels,” “The Debt,” “The Robinsons,” and “The All Together.”

In “Sherlock” that gave Martin the worldwide glory, particularly in the third season, the actor also played with Amanda Abbington. With all that, Amanda appeared as the Freeman’s character’s wife – Mary Watson. The second episode of the season is focused on the big wedding ceremony of the characters which the actors, apparently, did not have.

Both Martin and Amanda claimed in their interviews that working and spending much time together never exhausted them. On the contrary, they said they valued each minute they had together.

However, on December 22, 2016, the fans learned that the couple had split up. The ex-spouses had no scandals and revealed nothing about their problems on talk-shows. On the contrary, Martin Freeman pointed out that Amanda Abbington and he remained friends and he would always love and respect his ex-wife despite their breakup.

In 2016, the actor received the role in another popular franchise – it was the Marvel universe, particularly the superhero action movie “Captain America: Civil War.” In this movie, Martin Freeman played the American spy – however, the actor did not understand whether his character was heroic or antiheroic. It was a secondary role. After the movie was out, it was announced that Martin Freeman would appear in this role in another Marvel movie – “Black Panther.” 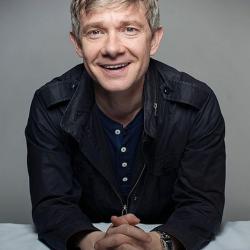