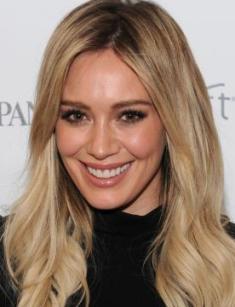 Hilary Duff is an American actress and singer, model, producer, and author. The talented girl was born on September 28, 1987, in Houston. The future celebrity grew up in a happy, well-off family. Her mother devoted herself to bringing up two daughters and running the household, while her father was the head of a store chain. Hilary's parents could afford a decent education for their children.

From early childhood, Hilary was engaged in acting, and her mother was the one who came up with this idea of a career for her daughter. At the age of six, the girl went on stage for the first time, in the ballet "The Nutcracker." It was not a coincidence that Hilary desired to become a ballerina. She wanted to follow in the footsteps of her older sister, Haylie.

The happy Duff family soon started falling apart. After the divorce, the mother took the children and went to Texas. The woman chose California, believing that there would be more opportunities for her little daughters.

After moving, Hilary Duff was no longer engaged in ballet but continued to study acting. The girl regularly went from one audition to another, and the mother strongly supported her beloved daughter. Hilary got invited to star in a television commercial, and this is how everyone discovered the talent of the future celebrity.

Hilary Duff appeared on the big screen for the first time in the motion picture titled Casper Meets Wendy. The actress played a little witch, desperately looking for a true friend. Unfortunately, the movie was in the box office only for a short while and almost immediately went to the archive.

In 1997, Duff was offered the role in the TV series True Women. Two years later, the actress played Ellie in the film The Soul Collector and received the award as the best young actress-performer of the supporting role. Then there was a cameo role in Chicago Hope in the "Cold Hearts" episode.

In 2001, Hilary Duff appeared in a new role for herself, a girl suffering from depression. Duff managed to portray this character in the movie Human Nature. Then the actress starred in the film Cadet Kelly. The image of the daughter of the commandant of the military school suited her very much.

Hilary became the center of attention on television after her work on the movie Agent Cody Banks. The film grossed $100 million at the end of the first week after the release. The audience also remembers the leading roles of Hilary in the motion pictures Mature Girls and Raise Your Voice.

However, the real fame fell onto the shoulders of the fragile girl after her role in the television series Lizzie McGuire. Even now, the name of this American actress is often associated with the character that Hilary played for several years. For the role of Lizzie Hilary was among the nominees for an Emmy award.

There are also dramatic roles in the creative biography of the actress, in such movies as A Cinderella Story and According to Greta. Unfortunately, A Cinderella Story failed at the box office, and the actress even received a booby prize, The Golden Raspberry Award, as Worst Actress. After the release of this movie, Hilary's career began to decline.

In 2006, the actress decided to try herself as a producer of the film Material Girls, in which she also played the role of a wealthy heiress named Tanzie. The film was a failure again.

Failures didn't break Hilary Duff – the girl continued to act. Viewers saw the actress in the criminal comedy movie War, Inc., the family comedy Foodfight!, as well as in the films According to Greta and Bloodworth.

At the same time as working on the filming sets, Hilary Duff devoted a lot of energy to her musical career.

The debut song of the American celebrity was the track called I Can't Wait, which Duff performed in 2002. This single became the soundtrack to the live-action sitcom Lizzie McGuire. The song "Why Not," written for the same television show, later was listed on Top-20 charts in New Zealand, the Netherlands, and Australia.

In 2003, Hilary Duff recorded her first album entitled Metamorphosis. The singer turned to teenagers in her songs. In the same year, the album became the leader of the American charts.

In autumn 2004 there was another CD in the style of rock. Three years later, Hilary recorded another album called Dignity. The album included songs that the singer sang together with Beyonce, Gwen Stefani, and Akon, prominent representatives of the American show business. Musical critics and experts received the album positively.

In 2008, Hilary Duff recorded a collection of the best songs on Hollywood Records studio, but the album did not become a great success. Nevertheless, some music videos of the singer became the favorites of quite several fans. Her audience especially noted the music video on the song Reach Out of the British band Depeche Mode.

In the summer of 2015, the singer released her fifth studio album. It included the songs "Sparks," "One in a Million," "Lies," "Brave Heart," and other tracks.

In March 2004, Hilary launched her fashion line, which was sold in America, Canada, Australia, and South Africa. Initially, Duff focused on the teenage audience but later decided to expand the production.

At the same time with producing stylish clothes, Hilary launched a line for the production of accessories, perfume, and jewelry. In 2008, Duff sold her shares of the brand Stuff by Hilary Duff, and soon it ceased to exist.

The second chance was her cooperation with DKNY Jeans, for which Hilary Duff developed a youth collection. The premiere fashion show took place in late summer 2009 in the United States.

In September 2006, Hilary Duff released her own perfume "With Love...Hilary Duff", which became one of the best-selling in America. Soon it was sold in stores in Japan, Canada, and Europe.

Hilary Duff is the author of three books. The first novel called Elixir appeared in 2010 and sold millions of copies worldwide. The work tells the story of a journalist looking for her father.

In October 2011 Duff published a second book, entitled Devoted, which was a continuation of the bestseller Elixir. True, Hilary's third book was sent to print in April 2013.

The actress and writer plans to release one more novel, but it has not been published yet.

Hilary herself believes that her love life did not work out. Journalists actively discussed her affair with actor and singer Aaron Carter. Duff even got into a fight with Lindsay Lohan over this guy. Hilary met Aaron in 2001 when she was 16 years old. Their relationship lasted until 2003.

After breaking up with Carter, the girl began to appear often in the company of singer Joel Madden. Two years later, the couple broke up. It was hard for Hilary Duff to get over this relationship.

Then, the actress was pursued by a fan who called himself Maxim Mayakovsky. The criminal threatened the actress with murder. Duff went to the police. As a result, the persecutor was sentenced to 117 days in prison and five years of probation.

In 2007, Hilary began dating hockey player Mike Comrie, and in the summer of 2010, they got married. Two years later, the couple had a son Luke. Their happy marriage did not exist for long – at the end of 2014, Hilary Duff filed for divorce.

It is known that the favorite food of the actress is cheese. Once in an interview, Hilary admitted to a passion for this delicious thing.

"The key to a happy life is cheese.” Which she says “is a real problem. I can’t say no to it.” "There is a shop in Beverly Hills which is constantly pulling my car like a magnet," Hilary said.

Hilary Duff's net worth has risen over the years to $25 million. In April 2017, Duff appeared in public in the original silk outfit from Gucci worth $4700. The actress showed off the bright look in New York. Her fans were fascinated with the mini-dress with ruffles from Spring-Summer collection of 2017. Even then, some still criticized the celebrity, arguing that this outfit did not suit her body type and figure.

In May 2017, the public charity of the actress reappeared. Hilary Duff sheltered a puppy-dwarf named Mojito, that was left by everyone to die. The star took the puppy from the dog shelter Love Leo Rescue, which is located in Los Angeles. The actress visited the shelter, saying that she intended to pick up Mojito, which she now calls Momo. Grateful rescuers of the puppies photographed celebrity and posted the photos on Instagram.

Hilary already had several dogs, but this did not prevent her from expanding her "family" by adopting another pet. It is known that the celebrity cannot live without her little Chihuahua dogs, which she has more than five.

Hilary's been spending more time on her personal life lately. After parting with fitness coach Jason Walsh, the actress began to go out with musician and producer Matthew Koma. Fans of the celebrity assumed that the new affair would last because together the couple already managed to visit Costa Rica. However, Hilary and Matthew failed to prioritize and to combine relationships and career successfully. As a result, the young people broke up.

The star was also criticized for her looks. In 2016, fans said that the actress stopped looking after herself, her looks and her body measurements (Hilary's height is 5 feet 15 inches, and she weighs 199 pounds). They did not like that sometimes she allowed herself to go in public without having any makeup on and without a fashionable hairstyle. Pictures in which a celebrity walks on the streets of Los Angeles, surprised many.

Despite such remarks, Duff has repeatedly stated that she takes care of herself, and fitness helps her overcome aggression and stress.

"I go to the gym three times a week, constantly changing day and time. I work with weighted balls, bands for fitness, and CrossFit-the rope. Also, I go to workout with a sledgehammer; it helps me to let out my aggression."