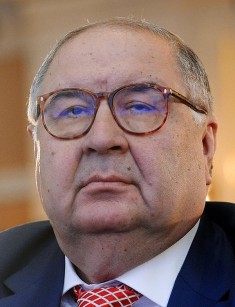 Alisher Usmanov is one of Russia's richest and most influential people, a Russian billionaire of Uzbek descent, with net worth more than $ 14 billion in 2015. A successful businessman and entrepreneur makes a huge contribution to the development of the Russian economy, culture and sport. He is also known in media circles as the owner of a large company "Mediaholding" and the publishing house "Komersant", music channels "MuzTV" and "7TV". The secret of Usmanov's success does not have definite criteria: he can achieve goals in any direction, from metallurgy to Internet business.

Usmanov Alisher Burhanovich was born on September 9, 1953 in a small town Chust, Uzbekistan in the family of prosecutors. His father was a prosecutor of Tashkent and had a significant position in society. The future Russian billionaire was the youngest child in the family. Moreover, despite the wealth and honor of the family, the young Alisher was brought up quite strictly and was not a spoiled child.

Even in his childhood Usmanov had "fighting" character and brilliant mind, he studied well at school, so the parents began to prophesy him a diplomatic or legal future. In parallel with his studies, he was actively engaged in fencing, his enthusiasm was inspired by Dumas's novel The Three Musketeers. Almost two years Alisher Burhanovich achieved serious success in sports - he was awarded the title of Master of Sports and was included in the USSR national team.

In 1971 after school, he entered the prestigious MGIMO University at the faculty of "international law". He was friends with all fellow students, many of whom are now in power. Despite the fact that he belonged to the "cream of elite youth" of that time, the future diplomat was sociable and intelligent. In 1997, already a successful entrepreneur, Usmanov received another education in the Finance Academy under the President of the Russian Federation and became a certified banker.

The career of Alisher Usmanov started brilliantly - after graduating from MGIMO, the young specialist was recruited to the USSR Academy of Science, received the post of senior referent of the Central Committee of the Communist Youth Union of the Republic of Uzbekistan and became general director of the Foreign Economic Association of the Soviet Peace Committee, which should lead him to the tops of the state system. But in 1980, there was a "black strip" in the biography of Alisher Usmanov - the future billionaire with his friend, who is also the son of a high-ranking official, was arrested and convicted on charges of fraud and 'theft of socialist property' and imprisoned for 8 years.

After 6 years, Usmanov was released early for his "good conduct", and in 2000 the Supreme Court of Uzbekistan rehabilitated him and found the criminal case against the businessman fabricated. After leaving the prison, Alisher Burkhanovich decided to start a business and established a travel company organizing a hunt for wealthy foreigners in the Pamir Mountains. After a while he moved to Russia, where he began his business career with plastic bags and tobacco.

Since the beginning of 1990s, after the collapse of the USSR, Usmanov has been a member of the banking business of the country – firstly he joined the board of directors of the "First Independent Bank", among the founders of which were the largest Russian companies such as Rosneft, MiG, Almazyuvelirexport. At this stage of his career, the future billionaire took firm positions in Russian business, began to create his own investment companies and soon earned his first billion.

Since 1997, Alisher Burkhanovich has connected his business with the country's gas structures and is gaining a leading position in the company Gazprominvestholding, which is a subsidiary of Gazprom. Then he was entrusted with a serious mission to return the assets of the gas corporation, which went to "private pockets", with which he coped. Thanks to Usmanov, Gazprom returned all its lost assets and again took the position of Russia's largest state monopoly.

By 2004, the businessman became the world's richest man and took possession of the largest iron and ore holding Metalloinvest, the estimated value of which amounts to 8 billion dollars. In 2007, the billionaire expanded his field of activity and became a media tycoon. Firstly, he bought a 100% stake in the publishing house "Komersant", and after a while introduced into his media assets music channels "7TV" and "MuzTV."

A year later Usmanov invested millions of dollars in Internet - he became the main shareholder of DST Global and Mail.ru Group, and later received full control. Then he bought a 23% stake in the London football club Arsenal, whose current leaders even hires a private detective to expose the billionaire and prevent him from joining the co-owners of the football club. But their efforts were unsuccessful, since it was not possible to prove that Usmanov had made his capital unfairly.

In addition to his business, the billionaire pays special attention to social activities and the development of sports in Russia. In 2007, Usmanov bought a collection of Rostropovich's paintings from his wife Galina Vishnevskaya for $ 72 million and donated the collection to St. Petersburg's Konstantinovsky Palace, replenishing the state "treasury" of cultural valuables. In the same year, he bought out a collection of Soviet cartoons from the Americans, after which he gave exclusive rights to the Russian channel Bibigon.

Since 2008, Usmanov's charity has acquired the official direction - the billionaire founded "Art, Science and Sport" Fund, and spent for the first year of activity about $ 126 million. In 2013, Alisher Burhanovich was recognized as the leader of the rating of Russian patrons, for which he was awarded with honorable state awards for active public and charitable activities.

He became a patron and an active organizer of the Olympic and Paralympic Games in Sochi in 2014, which allowed him to join the Board of Trustees of the Foundation for the Support of Russian Olympic Champions.

In 2015, Usmanov said he was ready to continue investing in the development of Russian sports and announced a new 100 million investment project to expand the cyber sport organization Virtus.pro, which is the first professional sports computer club in Russia.

The personal life of Alisher Usmanov as well as his career is also successful. He was fortunate in his youth to meet the only love of his life - the gymnast Irina Wiener, with whom he hand in hand passed all life's tests and earned multibillion-dollar wealth. The couple has no children; they raise a son from the first marriage of Irina Anton.

Currently, Usmanov's wife is the head coach of the Russian team in rhythmic gymnastics and the founder of the International Sports Academy of Irina Wiener, located in Novogorsk. For the past two years, the Usmanov family has been building the Olympic Village in the nature protection zone of the Skhodni River.

Net Worth of Alisher Usmanov

The net worth of Alisher Usmanov in 2015 is almost $ 14.5 billion. However, this number did not keep him at the position of the richest man in Russia, which he occupied the last three years. At the same time, the billionaire considers himself as a simple person and calls money the usual functioning mechanism that allows him to achieve his goals.

The billionaire also has human "weaknesses" - he owns two yachts named after his mother Dilbar, as well as his own Airbus A320. According to Wiener, her husband is crazy about football, in which he donates billions of rubles.

The businessman considers the secret of his success is the correct and accurate strategy in business. He tries to avoid fights and quarrels in his activities, which allows him to come out as a "winner" in many risky deals. 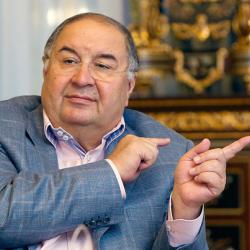