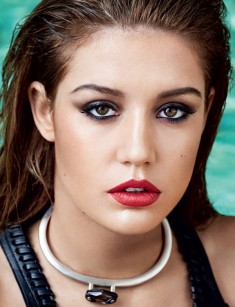 Adel Exarchopoulos is a French actress, famous for her role in the scandalous drama "La vie d'Adele", for which she won "Golden Palm Tree" award.

Adele was born in Paris on November 22, 1993. Her father Didier Exarchopoulos is a music teacher, guitarist, and his ancestors were from Greece. The girl's mother, Marina Nick, devoted her whole life to medicine. The childhood of the future screen star took place in the XIX Paris district, on the streets near the square de Fet. Three children were raised in the family: the elder child Adel and her two younger brothers.

As a child Adel grew up as a shy and unsociable child. In 2002 to overcome these qualities, the girl began attending children's theater studio. Adele quickly liked to be on the stage and at 12 she starred in the debut film "Martha". After a rather successful episode the girl was invited to the television series "R.I.S, police scientifique". A year later Adele appeared in the film "Boxes", and at 15 - in the film "Les Enfants de Timpelbach."

Adele Exarchopoulos appeared on the big screen, starring in the military drama "La Rafle" by Roselyne Bosch, in which the main roles were played by the stars Jean Reno and Melanie Lauren. The film about the Jewish people, who suffered during the Second World War from the fascists, collected $ 25 million in the world box office. In the next three years, Adel is working on the creation of diverse images in the films "Chez Gino", "Carre blanc", "Des morceaux de moi" and " I Used to Be Darker."

In 2013 the scandalous film "La vie d'Adele" by Abdelatif Keshish, the French director of Tunisian origin, was released. This film is known in the Russian box office as "Blue is the warmest color". For the acting biography of Adele, Kesish's film became a turning point. The love drama about the mutual feelings of two girls: a young artist Emma and a young teacher Adel - made a furore at the Cannes festival, and then impressed the film critics of the New World.

After the release of the film ""La vie d'Adele"" scandalous details of the filming process were published. In particular Leah Seydu spoke very often about the main director as a tyrant. And many employees complained that they should have worked 8-hours per day according to the contract but they worked more. In videos for online magazines, Adele always spoke very well about Kesish, calling him a genius. She expressed gratitude for the opportunity to work in such a project. But later many of the words of the young actress were paraphrased in the press and presented in a different light.

Adele attracts directors with her appearance of an innocent angel and how she looked on camera. The height of the actress is 173 cm, and the weight is 57 kg. Soft features, full lips and beautiful almond eyes help the Frenchwoman to create images of fatal heroines who are capable of great passion.

After the loud debut of Adele, the directors begin to invite the actress to the role of passionate beauties in the films “Les Anarchistes”, “Éperdument”.

In 2015 the family drama of a French-Russian production by Mikhail Kosyrev-Nesterov's "Voyage vers la mere" appears, in which Adel also played the main role. In 2016 Adele starred in the film by Arno de Palier "The Orpheline" along with Gemma Arterton, Adel Enel, Sergi Lopez, Nicolas Duvoshel. The plot of the film tells about the life and self-determination of the main character, who at different ages played four actresses.

Adel doesn’t like to show her private life. It is known that at the age of 20 the girl had relations with the actor Jeremy Laert, her partner in the film "La vie d'Adele ", but later they broke up. In 2016 in Instagram with 638 thousand subscribers, photos with her new boyfriend, rapper Morgan Fremont, better known under the creative pseudonym Doums, appeared.

Young people had relations since May 2016, and in November rumors arose that Adel was pregnant. This fact was confirmed after the actress visited the defile of Louis Vuitton on March, 7.

The girl did not hide her pregnancy from photographers and looked happy.

Currently, Adel Exarchopoulos doesn’t appear in film projects, as she expects the birth of the first child. 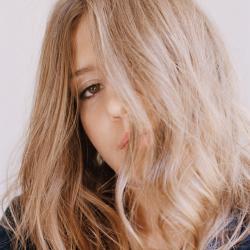